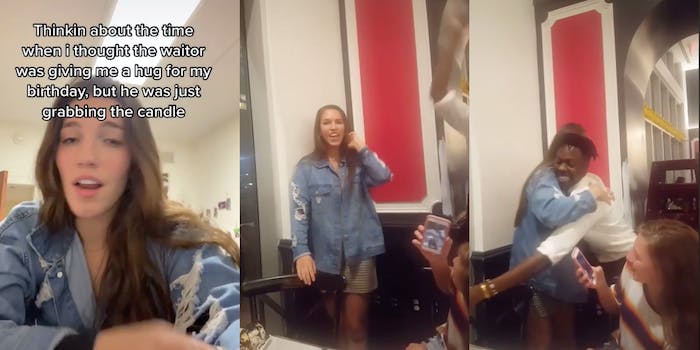 ‘That just physically hurt me’: TikToker shares mortifying moment she got shut down for hugging her waiter

'I would honestly never recover from this.'

We all have cringeworthy moments that come back to haunt us in the wee hours of the night. Those terrible memories that live forever, burned into your memory due to their sheer, inescapable embarrassment.

For TikToker @elizabethao037, who simply goes by Elizabeth on the platform, that moment occurred when she tried to hug a server at a restaurant and got brutally denied. And because someone caught it on camera, millions of viewers have now felt secondhand embarrassment from the mortifying clip.

The short clip begins with a shot of Elizabeth and a caption to set the scene: “Thinkin about the time when I thought the waitor (sic) was giving me a hug for my birthday, but he was just grabbing the candle.” A viral sound clip from The Real Housewives of New Jersey plays in the background. TikTokers are using the audio in their videos as part of a new trend where they revisit their most cringeworthy moments.

The video then shows Elizabeth at a restaurant, ostensibly celebrating her birthday. An excited server is smiling and excitedly punching the air next to her. He then leans over, past Elizabeth. It really does look like he’s going in for a hug.

So Elizabeth, polite young woman that she is, accepts the hug. But as she wraps her arms around the server, he continues to lean forward and grabs the candle off the table. The server doesn’t miss a beat. He simply snatches the candle and dips before Elizabeth can fully comprehend what just happened.

The video, posted to TikTok two days ago, has already been viewed nearly 14 million times. Most viewers were consumed by secondhand embarrassment by the end.

“That just physically hurt me,” one user commented.

“This is what panic attacks are made of,” another viewer wrote.

One person confessed, “I would honestly never recover from this.”

While most people agreed that it did, in fact, look like the waiter was going in for a hug, it didn’t change the painful reality of the video. As cringeworthy as the moment was, many viewers couldn’t look away, watching the video on loop.

“The more I watch the worse it gets,” one viewer wrote. “I would never be able to forget this if it was me.”

Other users applauded the server for his “wholesome” reaction to Elizabeth’s birthday celebration. Still, as one viewer wrote, they were going to need “3-5 business days to come back from that.”