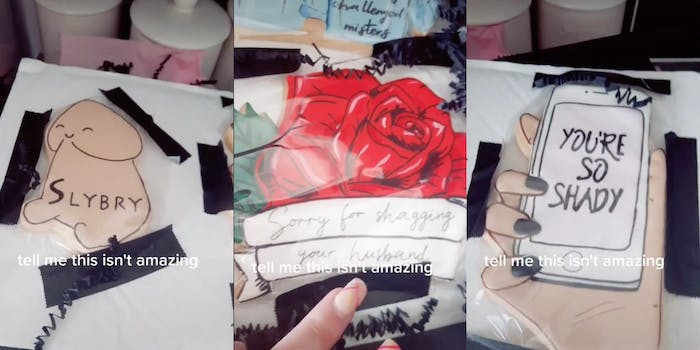 On the anniversary of leaving her husband, TikTok user Elizabeth Lindsay, known as @elizabethlindsay3, received a gift of decorative cookies from the woman her husband was having an affair with.

Lindsay posted a TikTok of the cookies, explaining the meaning behind each. The video has garnered over 147,000 views and 29,000 likes since Saturday.

Lindsay said the woman who had an affair with her now-ex didn’t know his real name and was being abused by him. One user commented on the video, “women supporting women.. with the best sense of humour humanly possible.”

The first cookie, shaped like a small, smiling penis, read “Sly Bry,” which Lindsay explained is a modified version of her husband’s nickname. “Tell me this isn’t amazing,” she captioned the video.

Another cookie was shaped like a hand holding a cellphone with the message “you’re so shady.” According to the TikTok, Lindsay’s husband accused her of being shady whenever she caught him having the affair. Go figure.

The third cookie, shaped as two women giving the middle finger with the caption “sisters before vertically challenged misters,” is pretty self-explanatory. The last cookie reads “sorry for shagging your husband” in the shape of a red rose.

Another user commented on the video, “this is what we all need to do if we found out.”

Judging based off the rest of Lindsay’s TikTok content, more than one gift may be in order. Her husband seems to have had multiple affairs with various women.

However, one good thing may have come from the affair: Lindsay is now friends with one of the women who had an affair with her husband.

Lindsay did not respond to the Daily Dot’s request for comment by the time of publication.