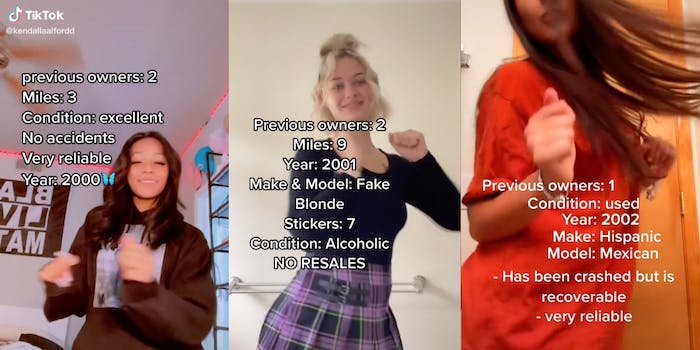 A new TikTok trend that has women trying to sell themselves by describing their dating history as if they were a used vehicle is a doozy.

Know Your Meme is calling this the “Previous Owners” trend. The trend sees women listing their “previous owners,” aka their number of exes. They use “miles” to represent their “body count,” or number of partners they’ve engaged in sexual activities with. They use “year,” “make and model” to list the age and description of their body type or personality, “stickers” for things like tattoos, and “condition” to describe themselves as “reliable,” “used,” etc.

A portion of the song “Let’s Groove” by Earth, Wind and Fire is part of the trend and is used in the videos of TikTokers who partake in it.

The creator of the trend hasn’t exactly been identified, but an early example noted by Know Your Meme is from @kendallaalfordd. The TikToker’s video garnered 531,000 views and 111,000 likes since it was posted on Sunday, with the caption: “Needs a new owner.”

Another example of the trend shows a young woman describing her “condition” as “used,” “crashed, but is recoverable” and “very reliable.”

Users have also taken the trend to Twitter, describing themselves only in text.

The trend has drawn criticism from those who expressed concern with listing oneself like a used vehicle for dating prospects.