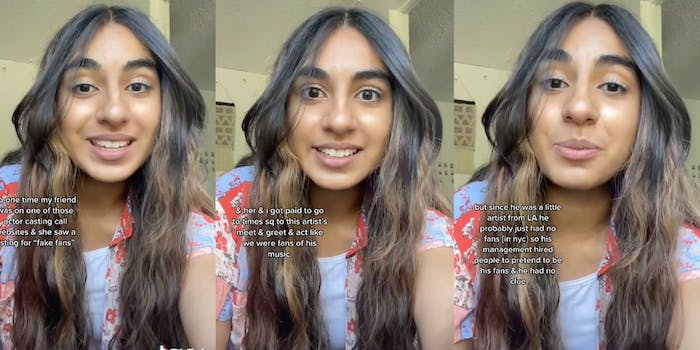 ‘We didn’t even know his name’: TikToker exposes how an artist’s team allegedly paid for ‘fake fans’ to show up to meet-and-greet

The TikToker refused to reveal the name of the artist in question.

A TikToker recently revealed the strangest way she’s made money in New York City: getting hired to pose as an artist’s fan at a meet-and-greet.

In a video, user @rynr0se claims a friend of hers was on a casting call website and saw a listing for “fake fans.” The two were promised payment, she claimed, to go to Times Square and pretend to be fans of a male artist’s music. The TikTok has over 500,000 views and 100,000 likes.

“He was being featured on Spotify’s electronic billboard in Times Square, so he flew from [Los Angeles] to come do this,” she explains. (The TikToker never discloses the name of the artist.)

And according to the user, the artist had “no clue” that actors were being paid to meet him.

“There were like 30 of us there and 95 percent of us were people who were paid to be there,” she said. “It was actually kind of sad because he was so happy. … We didn’t even know his name.”

While the story itself might sound sad, commenters allege that this is a frequent occurrence.

“This happens more than people realize with all types of events,” one user commented. “I work with a lot of new actors and get to hear about it.”

“Fun fact: This is actually what a lottt of influencers do for their meet/greets & pop up shops,” another said.

Others, however, were more concerned about who the artist was. But the TikToker refused to share. She did, however, divulge in the comments that his initials were DM. (Previously, some users guessed the musician was either Shawn Mendes, Alec Benjamin, DJ Mustard, or Declan McKenna.)

“None of y’all have guessed correctly & u probably won’t ever guess who it was,” she wrote.