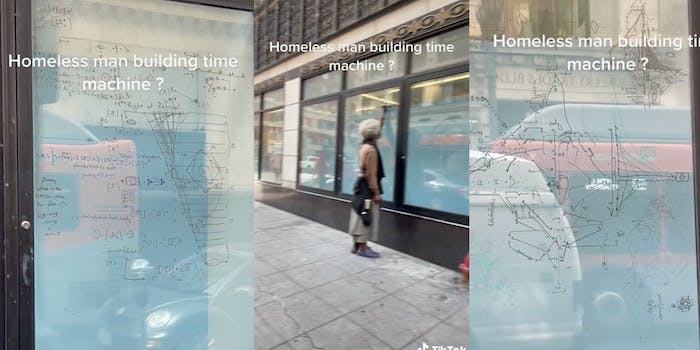 A TikToker has shared several videos claiming to show proof of time travel, including an alleged receipt from the year 2046.

A TikToker has shared several videos since July 24 claiming to show proof of time travel.

TikToker @comeatmebhai’s first—and most viral video, with over 21.7 million views—allegedly shows an unhoused man who is drawing what appears to be complex equations on windows in the street. “Homeless man building a time machine?” the TikToker, who now has over 138,000 followers, questions.

The TikToker’s next video—also viral, with 1.8 million views, hosts an “update” on the first video. It shows what the TikToker calls is “evidence”—a receipt from the year 2046. The receipt also has a “Neuralink ID” on it, and the cashier’s name is “Vorxtor.” It seems as if the TikToker is now claiming to be a time traveler.

In a third update, the TikToker, apparently after being directed to do so by a viewer, goes to what appears to be a library to look at a Los Angeles Times article from Aug. 17, 1854. The article allegedly proves how a man—who the TikToker claims is the unhoused man—was spotted scribbling on buildings at the time.

A most recent update shows the TikToket traveling to a step pyramid in an undisclosed location before trekking through a cave. “Went looking for the time machine,” the TikToker notes. On the cave wall, “equations” are very briefly seen and the poster alleges it contains coordinates to a nearby house, which is seen in the next cut of the clip. “What’s inside the house,” the TikToker questions.

While a few viewers believe the TikToker or unhoused man is time traveling, many are pointing to apparent holes in the TikToker’s videos. “I’m an engineer and even (the) simple equations he wrote down doesn’t make sense and are wrong,” one said.

“Y’all the cashiers name is Vorxtor lmao even if he’s 16 you think we gonna be naming our kids Vorxtor in 10 years? trying way to hard,” another said.

Many were caught up on the alleged equations the unhoused man was writing down.

Despite the criticism, the TikToker remains undeterred. “When I find this machine should I go forward or backwards in time?” @comeatmebhai asks viewers in the comments section of the most recent video.

The Daily Dot has reached out to @comeatmebhai.