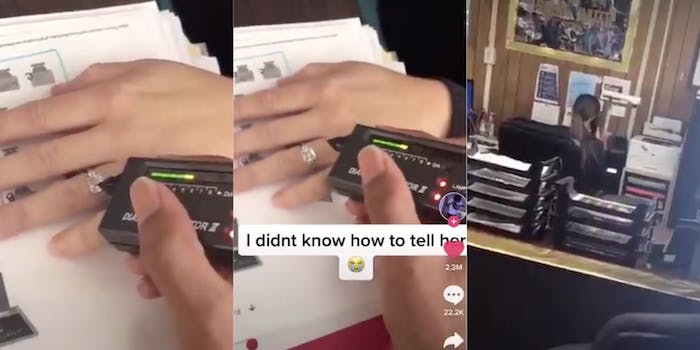 The reveals lead to some tense conversations.

A TikTok teen has gone viral by posting videos of himself using a gem-testing gadget to expose his teachers’ fake diamond wedding rings.

The videos come from @jexif, who’s gotten no less than 1.2 million views on each installment in his hilarious collection of wedding ring tests.

In the first video, he innocently asks the teacher if she thinks her ring is real. Of course, she does. But when @jexif exposes the ring as a fake, it leads to an uncomfortable conversation.

Another testing video led to @jexif’s teacher having a contentious phone call with her husband.

As one would expect, the comment sections for each video blew up, with many TikTokers joking that the teachers’ husbands were coming for @jexif. The videos gained additional traction when they migrated to Twitter.

The reactions to the videos have been incredible, rivaling the videos themselves.

While @jexif’s videos are hilarious, they also reveal the devastation that comes with these women (and men) learning that some of their most cherished possessions weren’t what they seemed. Some of these people spent hard-earned money believing their jewelers were legitimate.

“Y’all don’t understand the betrayal that is when you proudly wearing a symbol of your relationship and then realize it’s fake,” @SanairiaSounds tweeted. “Makes you think twice about the relationship like damn what else has been fake this whole time. The shit hurts.”

Some men felt the need to defend their brethren.

“Keep reading ‘why men keep giving us fake diamonds,'” @The_Other_TO wrote. “Ever think we just unknowingly spent a bunch of money on fakes from a lying jewelry store?!”

Twitter user @NoelleMckinley_ brought up one of the worst-case scenarios involving phony diamond rings: “I work at pawnshop and when women come in to sell their wedding rings after a divorce and find out either their diamond has been treated or is CZ or the gold is gold plated …. they be pissed!”