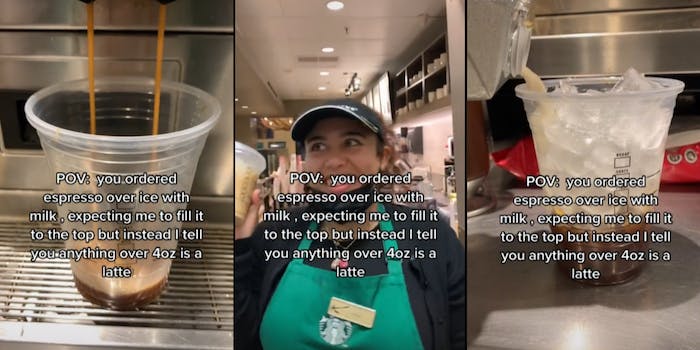 ‘People care too much about their work as if corporate America cares for them’: Starbucks worker says she shuts down customers who make ‘cheat orders’ to save money in viral TikTok, sparking debate

'You don't get paid enough to be doing all of this.'

When you order at Starbucks, is it OK to save money by choosing off-menu items? According to this Starbucks barista on TikTok, the answer is no.

In a viral TikTok that’s now been viewed more than 285,000 times, TikToker Arri (@thebrattylibra) revealed her response to a popular Starbucks “cheat” order.

Espresso over ice with milk is a strategic way to buy the main ingredients for iced coffee drinks with official titles like the Doubleshot on Ice—but depending on how you phrase the order, it can be much cheaper.

But Starbucks employees are obviously aware of the hack. Arri disapproves of customers gaming the system like this, writing on TikTok: “you ordered espresso over ice with milk, expecting me to fill it to the top but instead I tell you anything over 4oz is a latte.” So if your cup is filled up to latte-levels, you’re getting charged the full amount.

This attitude earned a lot of pushback in the comments section, with people criticizing Arri’s self-proclaimed “petty” attitude and loyalty to her employer.

“People care too much about their work as if corporate America cares for them,” one commenter wrote.

“I was this way once then I realized it’s not coming out of my paycheck,” another said.

“you don’t get paid enough to be doing all of this,” another person argued, to which @thebrattylibra simply replied: “Girl I be bored and I like to argue.”

However some people agreed with the TikTok, pointing out that Starbucks workers are trained not to fill up the cup for this kind of order.

The Daily Dot reached out to @thebrattylibra via a TikTok comment.