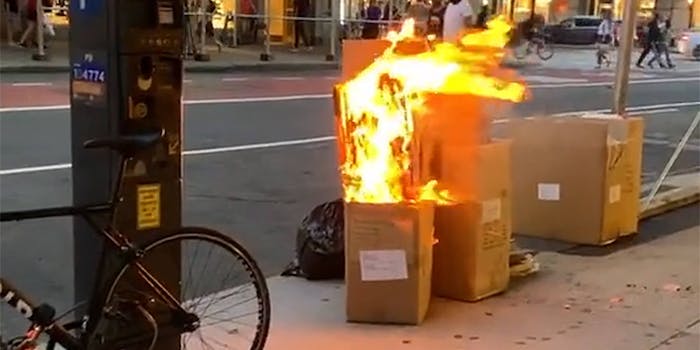 'I just really love the ambiance and there's such a charm to the city, you know?'

Ah, New Yawk, baby. There’s just so much to soak in in the Big Apple, you know what I mean? Nearly 8.5 million people live in the bustling city, and they take profound pride in their home and way of life. Apparently, the social distancing and stay-at-home mandates of the last two months have got New Yorkers feeling sentimental, prompting them to share some of their favorite things––in all of their damaged glory–on TikTok.

TikTok user @literallykaseyy kick-started the trend when she uploaded a video of a rat scurrying through a subway station.

“Sometimes people are like, ‘Why’d you move back to New York?’ And I was like, ‘I don’t know, I just really love the ambiance and there’s such a charm to the city, you know?'” she says.

Fellow TikTok users began placing the audio from @literallykaseyy’s post over their own videos that they felt captured the “New York City ambiance.” That ambiance means something different for everybody, but the common thread is that it’s always cinematic in its absurdity. Take, for example, the pile of clothes cascading out of an apartment window, evidence of a fight gone awry and somebody getting kicked out.

Or what about the makeshift bridge that New Yorkers fashioned out of “caution” signs to avoid stepping in puddles? So thrifty, so romantic.

Oh, and the way these thoughtful citizens constructed a barricade along the sidewalk to keep people safe from traffic and give cars a safe place to park is just total *heart eyes emoji.*

It’s no wonder a city as vast and eclectic as New York attracts tons of multi-talented artists, from bootleg Spider-Men to subway gymnasts.

Sometimes all the city’s charisma and creativity can be overwhelming, though, to the point that it becomes combustible.  Just take these literal dumpster fires and car fires as proof.

In the end, though, these are just minor gripes that come with the territory of living in the City That Never Sleeps. It’s worth it for that one-of-a-kind ambiance. New York, never change.