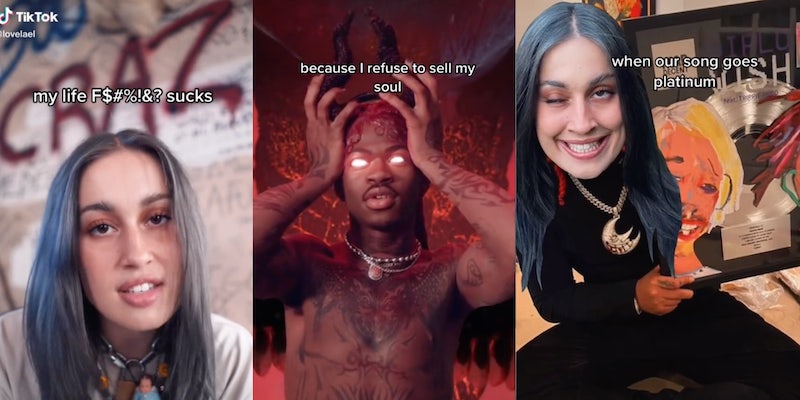 ‘Most entitled vid I have ever witnessed’: TikToker accused of lying and ‘guilt tripping’ to get people to pre-save her music

Despite the negative response, she is close to hitting her pre-save goal.

Musician and social media personality Lael Hansen is getting dragged for claiming on TikTok that’s she’s “never gotten lucky” or “become an overnight success,” despite having large followings across social media. Viewers aren’t buying it, with some

The TikTok is a promo for a song the 21-year-old artist will release at the end of the month called, “my life is boring.”

Hansen became known for making reaction videos on YouTube, where she has 1.17 million subscribers. She has 242,000 followers on TikTok, where she is known as @lovelael.

“My life fucking sucks,” the video starts. “I’m an artist from the middle of nowhere. I’ve never gotten lucky, or had any overnight success because I refuse to sell my soul. My life is pretty boring, but I know my music is special and my videos are gonna win a Grammy.”

Snippets of other videos featuring artists like Billie Eilish and Lil Nas X are incorporated into the video as well. Then, it shifts to showing a screenshot of an iMessage conversation where someone is shown saying that she can’t sing well.

“The only thing I don’t have… is a friend. Because my best friend, who I thought was my biggest fan, turned out to be my biggest hater. I don’t need her though, because I have you. Let’s prove her wrong by blowing this shit up. Sharing with everyone, and getting my song to 10,000 pre-saves before my birthday in five days.”

On Spotify, artists are able to list music for “pre-save,” where their listeners can preemptively add the music to their library, harkening back to the days of the album pre-sale.

“When our song goes platinum, I’ll look back at the pre-saves and remember you, a real friend that changed my life.”

Her video on TikTok has gained 942,000 likes on the platform and 6 million views. It also has over 40,000 comments, many of which are negative.

Commenters on the video compared her to Billie Eilish—and not in a flattering way. They also pointed out the irony in the similarity between the two artists and Hansen’s claim that she refuses to “sell [her] soul.”

“Your music video ‘crazy’ is literally a copy of 2018 Billie Eilish,” one commenter wrote.

Others took issue with some of her claims—particularly that she hasn’t achieved success with her music and online presence.

Another user, @fckjamesy, made a stitch with the video to call her out on what he describes as “cap,” or lies.

“See, I would follow everything you’re saying and wish you the best, if everything you were saying wasn’t cap,” @fckjamesy said. “You ran a YouTube channel with over 1 million subscribers. You say you have no friends, but you had the support of the entire hip hop community on YouTube at one point. On Instagram, a pretty good chunk of the music industry follows you. XXXtentacion’s mom follows you.

According to Know Your Meme, Hansen participated in a popular 2019 prank trend that featured people impersonating Billie Eilish in public places. Her prank video reportedly received over 2.5 million views before she took it down.

Others took issue with the phrase, “I refuse to sell my soul,” especially when paired with the image of Lil Nas X in his “MONTERO” music video. Folks viewed it as a dig toward Lil Nas X.

Lil Nas X happens to follow Hansen on Instagram, but it’s unclear if he’s seen her video referencing him.

As for the “friend” she referenced in the first video, some of her commenters think that person is fake. Others are calling the campaign a “guilt trip” and criticizing her for using this kind of tactic to gain attention. She’s even been accused of being an “industry plant.”

“This stinks of industry plant,” one TikToker said.

Regardless of the negative response, it appears Hansen is closer to her goal.

“Half of TikTok hates me, and that’s fine—I already hate myself for having to promote my music this way,” she said in a follow-up video. “But when you’re passionate about something that you made by yourself in your mom’s basement, you would do anything to see it succeed.”

“I’m just happy to be heard,” she continued. “I don’t think I could have asked for a better birthday present. We’re at 9,761 pre-saves.”

People came to her defense and sent her messages of support. Commenters shared their congratulations in the comments.

“I’m not sure why everyone hates her… I get she’s shoving her music and shi down everyone’s throat but don’t all singers do too…” one commenter wrote.

The Daily Dot has reached out to Hansen regarding the video.