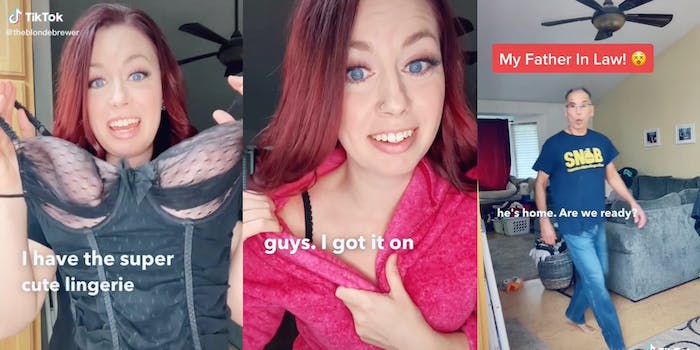 One TikToker’s attempt to give her husband a sexy surprise went hilariously awry after the wrong man walked into her home.

Maggie Clayton, whose account is full of endearing husband and wife content, wanted to surprise her husband with her new set of lingerie when he got home and get his reaction on camera.

Clayton flashes the cute (and fairly modest) lingerie at the camera as the video begins. She then slips into the outfit and covers up with a robe, excitedly informing the camera that her husband should be arriving home any minute.

Moments after Clayton disrobes off camera, someone can be heard entering the home. Unfortunately, it is very much not her husband.

As the middle-aged man walks past the camera, he spots his barely-clothed daughter-in-law. “Oh shit, oh shit,” he stammers as he turns and walks back toward the door. Off camera, Clayton frantically explains that she wasn’t expecting him to be home.

Some commenters applauded Clayton’s father-in-law for averting his gaze so quickly, while most felt they might explode from secondhand embarrassment.

“Have you tried time travel,” another suggested.

Other viewers were torn between making step-sister jokes and sharing their relief that the video wasn’t a new entry in the Silly Goose TikTok trend. Several people claimed the video was staged, which is a reasonable assumption, considering the majority of Clayton and her husband’s posts involve silly, scripted scenarios.

Staged or not, Clayton’s video is a huge hit. In one day, the viral video has earned more than 11.4 million views and 2.4 million likes. Now good luck building that time travel machine.