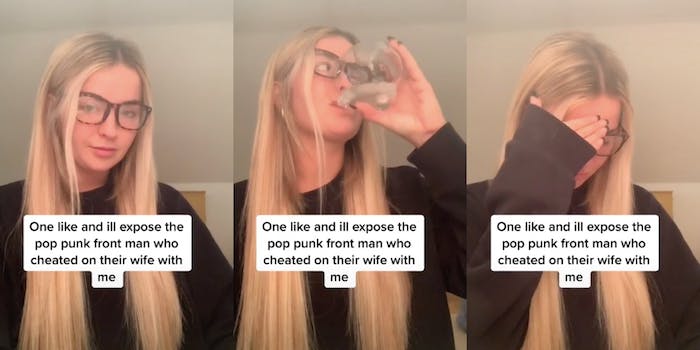 Not everybody's buying it.

A TikToker has hinted at a pop-punk frontman cheating on his wife with her in a new viral video—and viewers think they’ve identified the alleged culprit.

Madie O’Neill (@madieoneill1) uploaded the TikTok last night. The caption on the video reads, “One like and ill expose the pop punk front man who cheated on their wife with me.” The clip shows O’Neill, 24, looking at the camera, sipping water (or liquor) from a glass, and shaking her head in mock disappointment.

The TikTok—which has already been viewed more than 290,000 times—is set to the tune of “King for a Day,” a collaboration between post-hardcore band Pierce the Veil  and Kellin Quinn, lead singer of alt-rock/pop-punk band Sleeping with Sirens. Pierce the Veil frontman Vic Fuentes is not married, but Quinn is. TikTokers interpreted the song choice as a not-so-subtle clue that Quinn cheated on his wife, Katelynne, with O’Neill.

O’Neill included a disclaimer with her post: “BEFORE YALL COME AT ME I DIDNT KNOW HE WAS MARRIED UNTIL AFTER SO SHUT THE FUCK UP.”

In two follow-up videos, O’Neill shared screenshots of an alleged text conversation between herself and Quinn. The two make casual small talk, with O’Neill saying she has to go to bed to get ready for the Super Bowl (she works at Hooters), and the other person telling her to “sleep well boo.” O’Neill later says she doesn’t know why she’s still awake, to which the other person replies, “Cuz you luv to hate me.”

Not everybody was convinced by O’Neill’s screenshots. Several people joked that the conversation was “dry” and that the screenshots were not enough to incriminate Quinn—if they were even from him. Others thought posting the allegations on social media was disrespectful to Quinn’s wife.

“If you ‘didn’t know’ & cared about his wife you would have done this privately,” one user commented. “Posting it shows you’re just doing it for your 15 min. I’ll [sic] intentions.”

The ensuing social media reaction caused “Kellin Quinn” to trend on Twitter on Tuesday morning. Sleeping with Sirens fans expressed their shock and disappointment over the allegations on Twitter. Many of them juxtaposed the cheating rumors with the lyrics to Sleeping with Sirens’ breakout single “If You Can’t Hang,” which ostensibly contains a tribute to Quinn’s wife: “I met a girl at 23 / Knew she meant the world to me / So I gave her everything / And she did the same for me.”

Sleeping with Sirens’ publicist and O’Neill did not immediately respond to the Daily Dot’s requests for comment. Quinn has not yet publicly addressed the rumors, but his Twitter is now deleted and comments on his Instagram are disabled. It’s unclear when he made those changes, though at least one Twitter user said his Twitter has been gone for months.