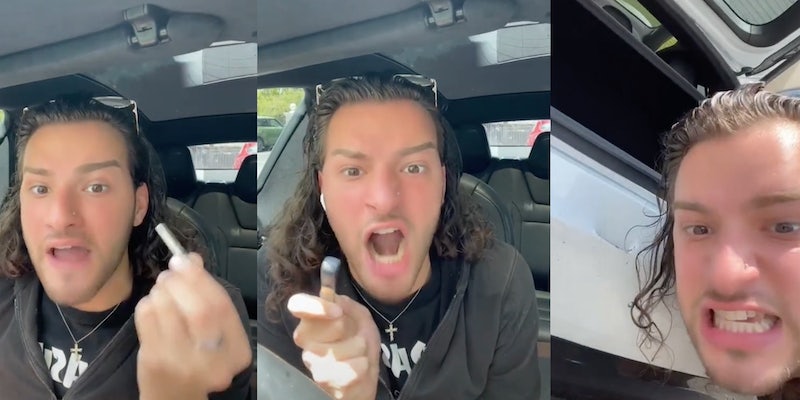 He called it a 'detailing experience from Hell.'

A TikToker is blasting a car wash and detailing shop in Orlando, Florida that he says damaged his Tesla and tried to destroy the evidence.

Creator @bryanthediamond, an influencer with over 3 million followers on TikTok, shared that he had taken his Tesla to be detailed at Sparkling Image, a business located in Orlando where he lives.

“Tell me how I take my car to get detailed at Sparkling Image, I think that’s what the fucking place is called,” he rants in the video. “They had good reviews online, I took it to go get detailed. When I go to get my car, I notice that my flash drive inside my car is literally broken in half.”

Tesla vehicles can store dashcam footage on a small flash drive which is in the car. Without the flash drive intact, Bryan said he cannot directly view the footage of someone rear ending his car. He claimed the flash drive had to be intentionally broken, as he had verified with the business that they were familiar with handling Teslas.

“They broke my dashcam so I can’t see the fact that they hit my car, and when I asked to see footage of the property, he literally said no,” Bryan said in his TikTok. “He just said no. So I think ok, you think you’re slick, so I called the police and filed a police report because fuck you, you’re not going to get away with that.”

Then he called in the big guns—Tesla itself.

“I called Tesla, because bitches really think they’re slick, but in case some people didn’t know, whenever my vehicle is hit, it sends footage to Tesla, babe,” Bryan said. “The dashcam is the only way that I can see it, but Tesla can see you hitting my fucking car, bitch. So now, I wanna see what’s gonna be poppin’, because I’m getting a new fucking bumper and they’re gonna fix my fucking car, and they better get in trouble for trying to get away with it.”

The Yelp page for the shop, Sparkling Image, indicates that it is under an “Unusual Activity Alert “after receiving multiple reviews referencing the incident. None of those ratings are currently available on the platform, pending review from Yelp regarding their validity.

Preexisting Yelp and Google reviews detail problems with satisfaction of service, the job done, and rudeness of employees. There are some good reviews in the mix, but currently the business is at a three-star rating on Yelp and one-point-nine stars on Google.

In a follow-up video, Bryan shared that his fans had been trying to leave bad reviews about his experience, but he claimed they were getting deleted by the company.

The company has not publicly confirmed that it was responsible for the damage to Bryan’s Tesla. The Daily Dot has reached out to Sparkling Image and Bryan.