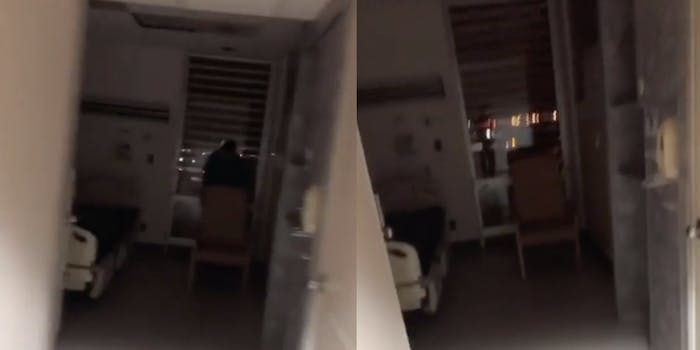 'My soul just left my body.'

An otherworldly TikTok has viewers debating the existence of the supernatural.

The TikTok in question, uploaded by user noah.vq, provides viewers with a glimpse into his job. Noah works security at a “practically abandoned hospital,” according to another of his TikToks, and the night shifts can get pretty spooky. When Noah heard some noise coming down an empty hall, he decided to whip out his phone. Because ghosts.

As the video pans over empty, minimally lit hospital rooms, Noah explains that he is on one of the empty floors of the hospital. “I was hearing some noise coming up right now,” Noah says in the video. “It’s kinda freaking me out so I’m gonna be filming a little bit.”

Noah pans past several empty hospital rooms before passing one that appears, disturbingly, to be occupied.

The brief glimpse of a dark, fleeting form was enough to convince some TikTok users that Noah has a ghost problem on his hands. “Noah. You saw him,” one user commented. “He was standing by the window. We saw him too. No denying that. U have a shadow man in that facility.”

Other viewers debated whether the form was the spirit of someone who’d passed in the room. Multiple users cautioned Noah that “shadow people”—a group that many thought the figure belonged in—can sometimes be aggressive. Suggestions for ghost-repellants came flooding in, as users recommended methods to keep Noah safe. Near the top of the list were black onyx, which is a “protection stone” according to HealingCrystals.com, or a religious charm.

Of course, plenty of viewers were unconvinced. They called the video a fake—albeit a good one—and accused Noah of using a friend to create the illusion of a specter. Noah, for his part, is sticking to his guns.

Noah’s other TikToks—he’s only posted three so far—are also shot at his place of work. For some reason, despite what appears to be persistent supernatural activity, Noah keeps showing up for his night shifts.