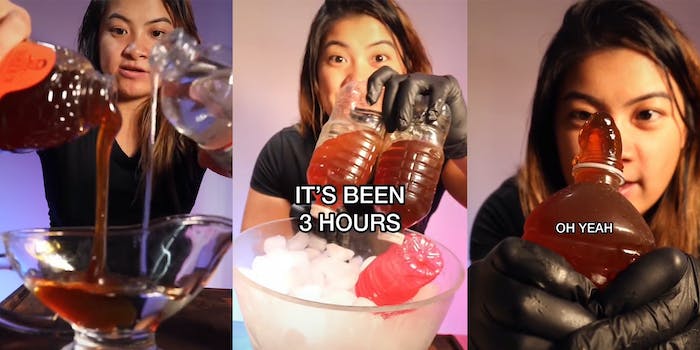 TikTok has zeroed in on its latest food hack: frozen honey. And it now comes with a warning from health experts that consuming too much could give you diarrhea.

This food hack is one of many that’s seeped out of TikTok. Some people simply freeze honey in the bottle (or in a water bottle) and then squeeze it out to eat. Several tutorials show TikTokers adding corn syrup or Kool-Aid to the honey to help its consistency and flavor. The account daveyrz has experimented with several different frozen flavors.

Some videos are just visually satisfying, and it seems this trend is linked to ASMR and mukbang videos. Eating raw honeycomb is also popular. (If you are not a fan of mouth or food sounds this trend is not for you.)

Seems like an easy summer treat, though many of the videos come with disclaimers that ingesting the honey led to upset stomachs. “Note to self: don’t eat three mouthfuls of honey in the morning, it will cause urgent bowel movement,” said lalaleluu.

Kristin Kirkpatrick, a registered dietitian, told NBC that in “small amounts” honey is good but consuming a whole bottle or more (especially with added corn syrup or another sweetener) can lead to “gastrointestinal distress.” The consistency of frozen honey is also not great on the teeth.

Still, it’s massively popular on TikTok; the frozen honey tag has been viewed more than 630 million times, and there have been some inventive (though not entirely edible) takes on the hack. But, as this chaotic frozen honey tutorial confirms, it just tastes like honey.