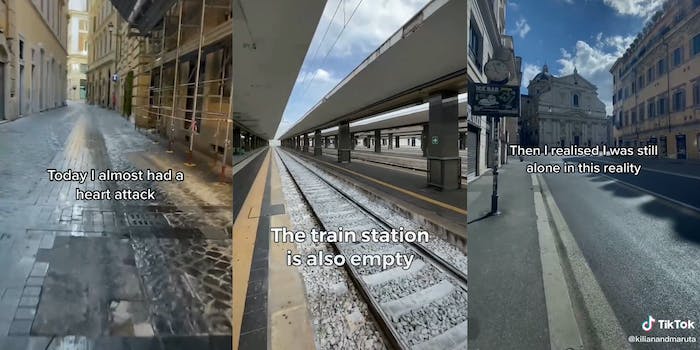 TikToker claims to have woken up in an alternate reality with no people, shows footage of an empty world

For the past few weeks, TikToker Kilian Maruta has been posting updates from what looks like a real-life horror movie. It’s impressively creepy and realistic, with Maruta claiming to have woken up in an empty world. Posted on March 23, the first video shows footage from an Italian city with no people in sight. But this wasn’t a one-off. The videos kept coming.

As the days wear on, Maruta offers commentary on more strange details. In this strange, empty world, food never goes rotten, suggesting that time isn’t really passing. Animals exist, but humans seem to have vanished. And in some locations, they left in a hurry.

In early April, Maruta started dropping hints about living in a simulation. Then April 11’s update spilled “the truth”: Maruta was a classified AI programmer who hacked into a company’s quantum computer and accidentally created a super-intelligent AU. As a result, Maruta respawned in this empty world.

Things get creepier as the story progresses, with Maruta adding more clues and plot twists. In late April, Maruta finds a kind of holographic barrier around the city. In early March, a humanoid monster appears and Maruta picks up a mysterious cellphone. And at the beginning of June, Maruta respawned on a deserted cruiseship.

Maruta’s empty world narrative is more elaborate than the various time travel TikTokers we’ve seen in the past. After a few updates, it’s pretty clear that Maruta isn’t really trying to hoax people; they’re posting a serialized horror/sci-fi story told through the medium of TikTok.

We don’t know much about Kilian Maruta’s identity, although whoever makes these videos seems to have pretty impressive video editing skills. This TikTok account has been active since 2019, posting a mix of real-life tourist TikToks and more experimental clips like this video claiming the TikToker’s uncle, a “nuclear scientist,” gave them a secret code that forced them to go on the run. So they’ve been playing around with creepy fictional TikTok concepts for a while, but things really took off with the “empty world” series this year.