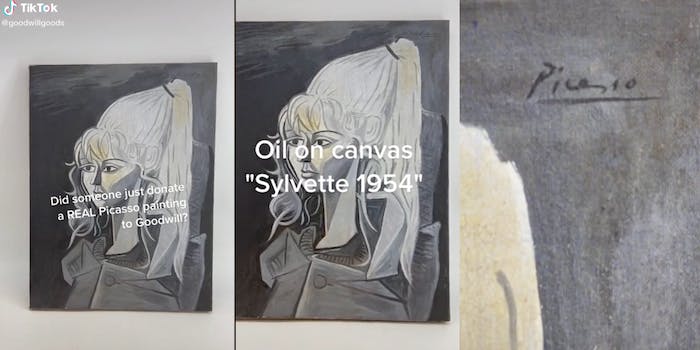 ‘Is it real?’: TikToker finds alleged Picasso painting with exhibition stamps at their local Goodwill

A video claiming to show a Pablo Picasso painting being found at a Goodwill store has gained 3.8 million views on TikTok.

“Did someone just donate a real Picasso painting to Goodwill?” a text overlay on the video posted by @thriftorthat reads.

The video shows the back of the painting, where a label has been affixed to it. The label reads, “Oil on canvas, Sylvette 1954.” It goes on to comment on the cracking of the painting from age, exhibition and collection stamps being attached to it, and asks if any viewers might be able to assist in determining its authenticity.

While some commenters were very serious in suggesting that the TikToker take the artwork to an art appraiser or their own local art museum, others noted that the portrait bore a strong resemblance to pop musician Ariana Grande, with her iconic high ponytail.

“Rip Picasso you would have loved Ariana Grande,” one commenter wrote.

Others cracked jokes about the artwork in reference to the video game Animal Crossing: New Horizons, in which a fox named Redd sells artwork that is then appraised by the museum director, an owl named Blathers.

“Ask the owl in the museum he knows,” one commenter suggested.

One commenter with art history knowledge stated that it is a copy——the authentic painting is currently in a museum’s art collection. Other art historians also chimed in to point this out.

“This is not the original, sorry!” one commenter wrote. “The original by Picasso, painted May 3, 1954, is in the collection at the Kunsthalle Bremen. I was acquired in 1955, it last went on view in 2014. The other hint is that the label for the block collection doesn’t quite match the authentic tag.”

The Daily Dot has reached out to @thriftorthat via TikTok DM regarding the video.