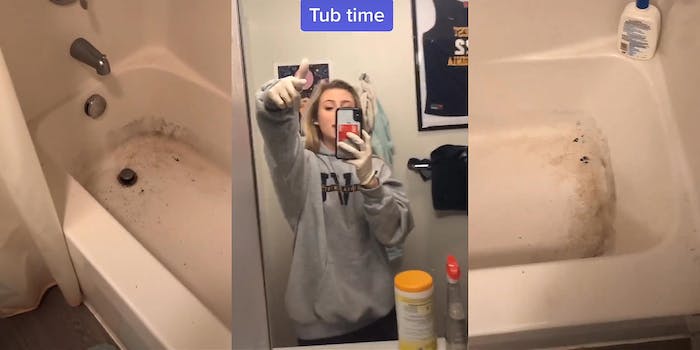 Abby Jones' tub-cleaning video is not for the faint of heart.

Abby Jones might not have anticipated the anxiety she would trigger by cleaning her bathtub, but a recent TikTok took a lot of people to a dark place. (Her bathtub.)

The 19-year-old, who goes by “clean queen” on TikTok, posted a four-part series earlier this week, in which she states that it’s “tub time!” before showing viewers the ring of dirt in her tub and attacking it with glass cleaner.

It only gets worse from there, as Drano, paper towels, and dish soap are thrown in the mix. And a dead spider, for good measure.

She got dragged on Twitter for seemingly being new to cleaning and chores, but she is being upfront: Her TikTok bio states, “Idk how to do this whole adulting thing.”

Before “tub time,” Jones chronicled the horrors of a clogged sink and more recently has moved on to cleaning her room, asking followers to “Leave suggestions of stuff around my house for me to clean LOL.”

Jones tells the Daily Dot that after the sink videos blew up, she asked her followers what she should clean next, and her tub was the consensus.

“It was really dirty because I never learned how to clean a tub or when the right time to clean one was so that explains why it was so nasty,” she says. Jones went from roughly 1,000 followers last weekend to more than 779,000 and says commenters started calling her “clean queen,” so she renamed herself.

Another recent viral TikTok that showed a woman cleaning her friend’s room was divisive: Some people said it was thoughtful and supportive; others thought it was an invasion of privacy. But we’re given a window into people’s rooms and homes on TikTok, and into people’s learning curves. While Jones’ videos are also divisive, it signals how TikTok can be used for crowdsourcing, even for something as nebulous as learning how to be an adult.

“I basically used my comments to kind of teach me what items work best to clean and other proper ways to clean and fix things around my apartment,” Jones says. “I would definitely say this is my first step into actual ‘adulting,’ like learning to take care of myself and how often stuff needs to be cleaned.”