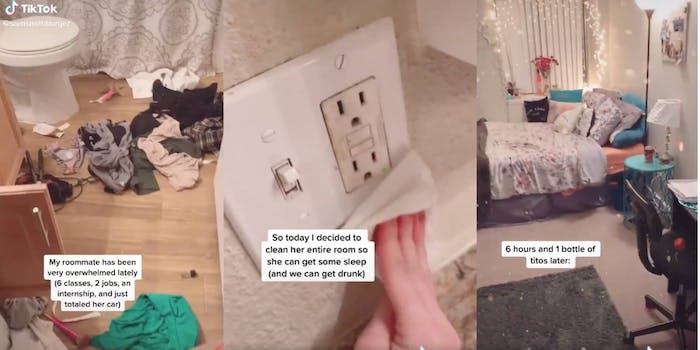 'The state of my home during depressive episodes is between me and god.'

A viral video showing a college student cleaning up her roommate’s bedroom and bathroom has the internet thoroughly divided.

Sam Smithburger originally shared the video to TikTok, where it has garnered almost 8 million views, but it rapidly spread across all social media as people debated whether it was the best video ever or a total invasion of privacy.

It’s obvious from the start that Smithburger’s intentions are nothing but pure.

“My roommate has been very overwhelmed lately (6 classes, 2 jobs, and internship, and just totaled her car,” she wrote, showing the world just how messy roommate Jenna’s world had become. “So today I decided to clean her entire room so she can get some sleep (and we can get drunk).”

The rest of the video shows Smithburger doing just that—not just tidying up but full-on scrubbing down the shower, vacuuming everything, and even doing Jenna’s laundry.

“6 hours and 1 bottle of titos later,” the job was done, and Smithburger showed off a sparkling clean living space.

It’s easy to get overwhelmed by life, particularly when you have a ton going on (which it sounds like Jenna does) and even more so when depression kicks in, setting off a spiral where it only becomes more and more difficult to get your life back in order the worse things get.

As such, it didn’t take long for Smithburger’s act of kindness to strike a chord with others who have needed a helping hand now and again.

But others expressed concern that Smithburger encroached upon her roommate’s space and ultimately broadcast the whole thing to millions of people.

“That tik tok of the girl cleaning her friends depression mess is a sweet concept but none of y’all better ever come up in my shit filming like that lmaooo the state of my home during depressive episodes is between me and god,” Twitter user @CeciATL wrote.

Jenna herself jumped into the conversation eventually, copping to being the one with the messy room on Twitter. And while she admits having everyone see her room was an embarrassing experience, it sounds like Smithburger’s gesture ultimately outweighed the negative.

“Ok yea I’m room girl,” she wrote. “I was embarrassed bc it’s hard to admit to struggling, especially to 7 million people but I’ve seen so many conversations about mental health start bc of this. Feeling supported instead of judged is huge. Sam is an incredible example of that I’m so lucky.”

“Also I would have cleaned my room if I knew 7 million of y’all were gonna be in it,” she joked.

But the roomies are definitely on good terms. Smithburger even posted a follow-up video explaining that she wanted to apologize for showing Jenna’s room to the world, so she and her friends baked an apology cake and filled Jenna’s once-clean room up with balloons.