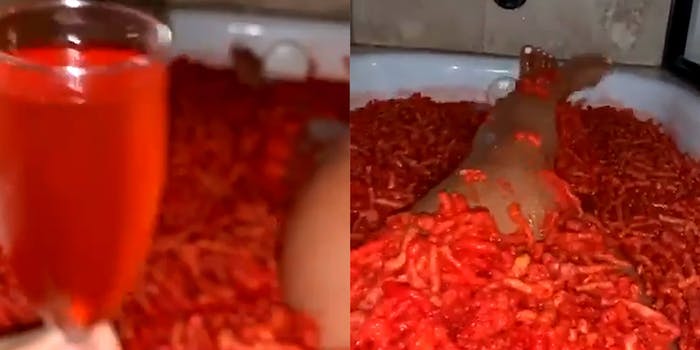 Well, she answered at least one of them.

When you think of Hot Cheetos, do you think of “me time”? One woman took that idea to its illogical conclusion.

Over the weekend, Twitter user @sp00kynugget posted a video with the caption “omg so needed after this stressful day.” In the short clip, she luxuriates in a tub filled with Hot Cheetos and a glass of something red—Cheeto nectar?

This, of course, set off a chain of horrified and bemused reactions. People had questions about logistics, prep, cleanup. Too many Hot Cheetos have sent people (or at least Lil Xan) to the hospital.

She also answered one of the most burning questions in the thread.

We reached out for comment about the origin of this idea, but people are already experiencing Hot Cheetos bath fatigue.