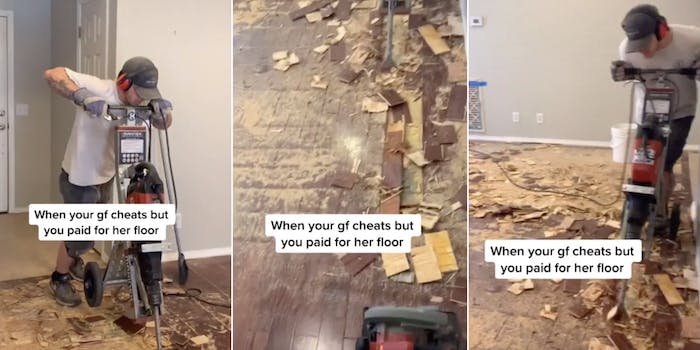 'Since you already walked all over my boy’s heart...'

How far would you go to support your friend after they got their heart broken? One viral TikToker proved his loyalty by helping his friend remove his ex-girlfriend’s floorboards after learning she allegedly cheated on him.

TikToker Ivan Cervantes (@elhispanic100) documented his friend’s revenge plot in a Sept. 12 video that has been viewed more than 3.3 million times. The video is captioned “When your gf cheats but you paid for her floor” and shows Cervantes’ friend tearing up the hardwood, which he originally installed, with a floor scraper.

Unsurprisingly, Cervantes’ friend’s ex did not take kindly to her destroyed floorboards. Cervantes shared a snippet of the unhappy couple’s confrontation in a follow-up video that has been viewed 1.7 million times.

“You’re so freaking childish. No wonder I cheated on you. I needed a man,” the ex says. “Maybe you didn’t turn into a man because your dad wasn’t even in your life, because he didn’t even want you. You piss me off so much. This is why you don’t amount to anything because you’re so fucking childish.”

In another video, Cervantes explained that his friend had been dating his now-ex for three years, and he thought he was going to marry her before learning she cheated.

Halfway through the DIY demolition, Cervantes’ friend started to feel bad and second-guessed his decision. But after the argument with his ex, he carried out the rest of his plan with gusto, tossing the floorboards into a fire.

Cervantes left his friend’s ex with a message: “Since you already walked all over my boy’s heart, have fun walking over nothing, bitch.”