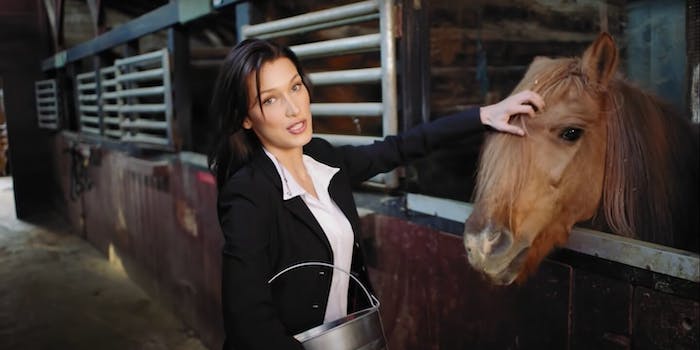 The resemblance is striking.

Bella Hadid is known for being one of the most beautiful models in the world. She is also known for her striking resemblance to Carla Bruni, singer and wife of former French president Nicolas Sarkozy.

But it turns out, Hadid also bears a striking resemblance to someone else—a random girl on a Moscow train.

A TikTok video shows a little girl on a train, snuggled up to someone who appears to be her mother. The girl is looking off to the side as the light hits her face, and shows off the near-exact defined facial features that has made Hadid one of the most famous people on the planet.

“Bella Hadid’s daughter in Moscow,” the video read, as the song “Goliaths” by Big Samurai plays in the background.

No word if Hadid has seen the video yet, but surely even she could see the resemblance here.

People have been talking about the model excessively on Twitter these past few days, because paparazzi photos of her from 2018 have begun circulating the internet again.

“I need to work hard so i can afford bella hadid’s plastic surgeon cheeeeckkk,” tweeted @aimeeAls

People are also talking about how her ex-boyfriend, singer the Weeknd, released an album with numerous songs seemly dedicated to her, somehow proving the power of her beauty.

“I don’t know what Bella Hadid did to the weeknd but the album really slaps hard,” said @pawbabasa

“I can understand why the weeknd has dedicated his last 30 songs to bella hadid. i really can,” commented @deeeejx

So, it’s safe to assume that Twitter would agree that this little girl in Moscow has been blessed with good genes. While everyone is trying to hire a plastic surgeon to get Bella Hadid’s face, this little girl was born with it. Someone needs to get her a modeling contract, immediately.