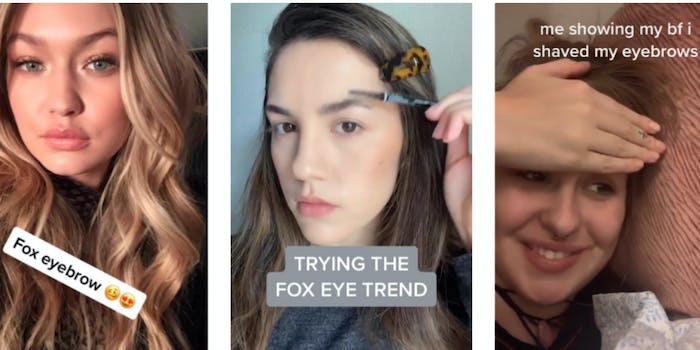 TikTok teens are shaving off their eyebrows to ‘look like’ Kendall Jenner, Bella Hadid

The Fox Eye challenge has people shaving off the outer half of their eyebrows to achieve a more lifted look.

People on TikTok are obsessed with a new beauty trend, and it involves shaving off half your eyebrow.

The Fox Eye challenge entails people shaving off the outer half of their eyebrows to achieve a more lifted look, and models Bella Hadid and Kendall Jenner seem to be the templates for it. It’s long been suggested that celebrities get this look via Botox brow lifts, but that’s changing. A plastic surgeon in New York City told Vox: “Maybe half of my patients will come in and say, ‘I want a Botox brow lift,’ which is something that never happened even literally six months ago. People didn’t know that was a thing.”

Under the #foxeye hashtag, which has more than 3.8 million views, people showed the process of shaving and then filling in the brows.

Some pointed out that you don’t actually have to shave them if you have the right makeup. All you need is a good concealer.

Others took a more natural approach by tightly tying back strands of their hair.

It was also pointed out that this isn’t really a new trend.

While being able to stroll into an office to get a quick brow lift is a luxury many people can’t afford, taking a straight razor to your eyebrows isn’t exactly the best DIY solution. Brow stylist Joey Healy told Refinery29 that “Straight blades can be far too dangerous” and suggests that if you must shave, use a serrated razor so “there’s less of a chance of cutting the skin.”

Now, the most important question: Is there anyone on TikTok who’s shaved half their eyebrow and glued their upper lip?