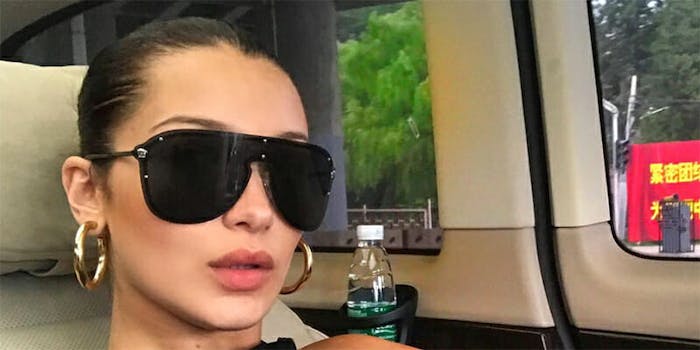 Bella Hadid sent ripples through Chinese social media channels on Tuesday when she posted an Instagram photo of herself traveling through Shanghai.

The selfie—blasted to her 17.2 million followers—showed Hadid in a car and was unremarkable save for a red and yellow banner in the background of the vehicle’s window. According to SupChina, the sign is promoting the Chinese President Xi Jinping.

Here’s the reported translation of the banner: “Closely united around the party that has Xi as the core. Making relentless efforts to realize the Chinese dream of the great national rejuvenation.”

Last year, Gigi Hadid, Bella’s supermodel sister, posted a video showed her appearing to mock Asian facial features by squinting her eyes. The backlash on Chinese social media—including #GigiGetOutofChina—was so great that it was likely the reason Hadid didn’t walk in the Victoria’s Secret fashion show in Shanghai.

In light of the incident with her sister, people speculated about whether Gigi Hadid intentionally included the political banner in her selfie as a way to ingratiate herself with her Chinese audience.

“Her intention is quite obvious. I don’t believe you can randomly take a picture and have that whole banner in the background,” one user wrote on Chinese social networking site Douban. Others debated whether the photo was a PR stunt or if Hadid understood the banner at all.

Amid the frenzy, Hadid deleted her original picture and replaced it with a cropped version cutting out most of the banner—without comment on whether she had deliberately included the sign in the first place.

Other recent Instagram photos show Hadid touring around Shanghai. According to SupChina, some think she’s “trying too hard” to please the country that barred her sister.