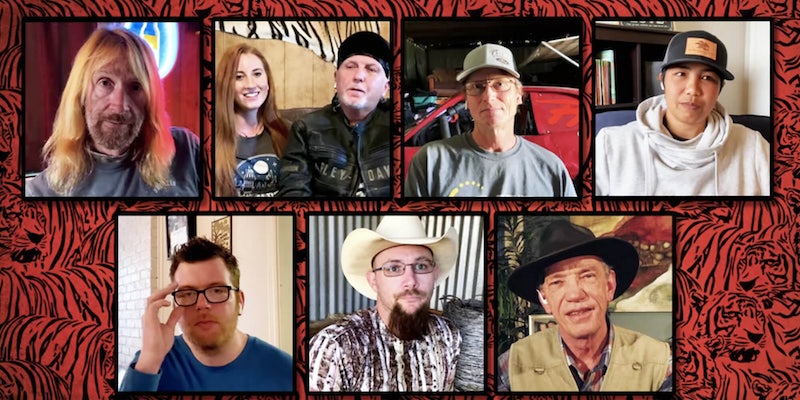 ‘The Tiger King and I’: Everything we learned from the new episode

The so-called 'Tiger King' was terrified of his own big cats.

Tiger King: Murder, Mayhem and Madness, the riveting true-crime docuseries about private zookeeper Joe Exotic, was an unmitigated smash sensation for Netflix. So, it would only make sense that the streaming service would want to capitalize on that success with a follow-up “where are they now” episode. Unfortunately, part of the doc’s inherent popularity—namely, the coronavirus pandemic that has people around the globe quarantined in their homes—also made logistics for an aftershow somewhat tricky.

Instead, Netflix enlisted the help of Joel McHale to interview the key players remotely (minus the “Tiger King” himself, Joseph Allen Maldonado-Passage, who is currently riding out a 22-year sentence in federal prison; and Carole Baskin, who may or may not have killed her first husband) to see what everyone is up to today. In a nutshell, pretty much everyone involved is now much, much better off without Joe Exotic in their lives—including the animals themselves. Let’s dig in, shall we?

Erik Cowie still serves as the head zookeeper at the Greater Wynnewood Exotic Animal Park, which is now run by Jeff Lowe. But other than the comparatively less tyrannical rule, the main thing that has changed in Cowie’s life is his newfound viral fame.

Cowie doesn’t understand what a meme is—or “me me,” as he pronounces it, just like my mother-in-law—or why people point their phones at him when he goes out in public. In fact, his ongoing duties at the zoo have kept him busy enough that he hasn’t even watched it yet.

But Cowie did have time for a chat with McHale, even if he was less than amused with people comparing him to Vince Neil of Mötley Crüe. “They’ve never been my thing,” he said. “Too plastic, man … I’m sorry.”

But what Cowie finds underwhelming in memes and Crüe, he makes up for with a love of irony—specifically, due to the fact that his former boss is now the one in a cage. “He’s gonna die in there, good riddance,” he said.

To answer the most pressing question on everyone’s minds—yes, Jeff Lowe got his “hot nanny” after all. As McHale pointed out, when you type “Jeff” into Google, it auto-fills “Jeff Lowe nanny.” For her part, his wife Lauren seems weirdly OK with the situation, but she had to have known what she was getting herself into when she married the tiger sex-cult guy.

While the Lowes were not exactly thrilled with the way they were portrayed in the Netflix series, one thing they agree upon is that Carole Baskin did indeed kill her first husband—or so they say.

“Abso-fucking-lutely,” said Lauren, when asked point-blank if they believe Baskin did the guy in.

Saff was surprisingly chill about being misgendered

Kelci “Saff” Saffery, the G.W. Exotic Animal Park staffer who lost his arm in a tiger-related accident—which is a polite way of saying a tiger pretty much bit his arm off—was referred to using she/her pronouns throughout the series, despite the fact that he identifies as a man. This justifiably set people off, however, Saff seems to be mostly unbothered by it.

“I don’t think it bothered me as much as it bothered everybody else,” he told McHale. “I didn’t really pay it any mind.”

Although, it’s worth noting, as Josh Dial later sadly points out, is that Oklahoma—being a red state—is notoriously unfriendly when it comes to the LGBTQ community. It’s possible that being misgendered on a Netflix series is the least amount of discrimination he’s faced throughout his life, unfortunate as it is.

Travis didn’t mean to kill himself

Speaking of Josh Dial—Joe Exotic’s former campaign manager told McHale that he knew full well of the “batshit” situation he was getting himself into, but as a political science major thought it was a once in a lifetime opportunity. What Dial was definitely not anticipating was watching a man kill himself in cold blood.

When discussing that horrifying and traumatic moment, McHale asked Dial if he believed Joe’s husband Travis (who the series established was not actually homosexual) meant to kill himself. At the time, Dial said that Travis was attempting to prove that a new gun Joe had bought him wouldn’t fire without a clip.

“I was looking at him in the eyes when he did it,” Dial recalled. “And I could see the surprise and the fear in his eyes. I mean, basically it translated, he’s like, ‘Oh crap. What did I just do?'”

Despite having to continue in the same office where Travis shot himself for a year and a half (with the bullet hole still in the wall), neither Joe nor Jeff would help get him the counseling he clearly needed. Likewise, Joe did not seek out counseling but instead consulted with “a shaman” that Dial says only worsened his condition.

The (not so shocking) reason John Finlay was always shirtless

One former Tiger King castmember whose life seems to exponentially changed for the better is John Finlay—one-third of the gay throuple marriage between Joe Exotic and Travis. Since the doc finished filming, Finlay got himself a brand new set of teeth! He’s also engaged to his longtime girlfriend and the couple has a little girl.

However, Finlay was not thrilled that the series seemed to portray him as “a drugged-out hillbilly,” when in actuality he had been for clean for four or five years at the time—having decided to “never touch a drug again” when his daughter was born.

But perhaps—and not to further disparage the guy—people got that impression due to the fact that in on-camera interviews, Finley was never wearing a shirt. For that, Finley offered a simple explanation.

“I got tattoos, why not show off?” he told McHale. “I mean, it was a little cold but it was fun.” He’s also since finished covering up his unfortunate “Privately Owned, Joe Exotic” tattoo, but thought his tattoo artist also received unfair criticism online.

The cast on who should play them in a movie

It’s pretty much inevitable that the Tiger King saga is headed to the big screen, and McHale asked a couple of the castmembers who they’d like to portray them in a film adaptation. Exotic’s former right-hand man John Reinke sees Matthew McConaughey stepping into his colorfully painted legs. (Although, as McHale points out, McConaughey is getting some buzz to star as Joe Exotic himself.)

Meanwhile, Saff suggests “the kid who played ‘Johnny Tsunami,'” meaning actor Brandon Baker from the 1999 Disney Channel Original Movie about “a young surfer from Hawaii who must adapt to new challenges when his father’s job forces the family to move to Vermont.” (Baker’s last known role was “Accountant” in something called Up on the Wooftop from 2015.)

Perhaps the biggest revelation of all came from Rick Kirkham, the former Inside Edition reporter who Joe hired to produce his TV series from a Craigslist ad. Now living in Norway (because it was the furthest place “from Oklahoma and that zoo,” and also because he fell in love with a Norwegian woman) Kirkham revealed that Joe was actually terrified of his own cats. In one scene, in which the former zookeeper was seen in a cage with two tigers, Kirkham says the reality is that one tiger had been blind and the other on tranquilizers.

This says a lot about Joe Exotic, and the treatment of the animals under his care. The one constant from all the castmembers interviewed was how terribly Joe treated his own cats. For his part, Kirkham said he saw Joe shoot two tigers dead—in one instance, because the tiger had “pissed him off”—and he wholly regrets his involvement.

“About three months in, I began to see him do things to animals that I knew was wrong,” Kirkham lamented. “I sold out my own journalistic integrity by not going to the authorities or an animal rights activist and saying, ‘Hey, you need to come in and stop this guy.'”

The only G.W. Exotic Animal Park staffer who feels any sympathy towards Joe is Saff. Yet, Saff still feels outraged when he thinks about the brazen gaslighting that took place when Joe would abuse and kill his tigers. “Joe always had a way of explaining his actions,” he added.

“I think justice was served,” Saff told McHale when asked if Joe got what he deserved in the end. “But I still don’t wanna see that man die in prison.” Barring a presidential pardon from Trump, it seems likely that will be the case. Hate to see it.