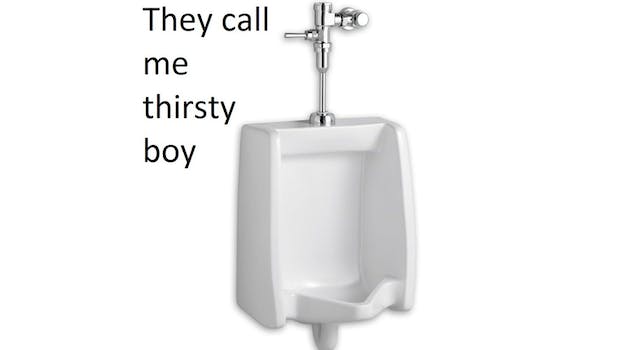 A “urinal,” you say? No, my friend, you’re thinking of a Thirsty Boy.

What’s the English word for the ceramic, wall-mounted receptacle in public restrooms, the one men typically pee into in a standing-up fashion? A “urinal,” you say? No, my friend, you’re thinking of a Thirsty Boy.

“What the hell?” you’re probably wondering. “Did someone change the name of a common plumbing installation while I wasn’t paying attention?”

It received thousands of Twitter faves at the time, but it only caught on as a meme this week, when Reddit’s me_irl, a leading barometer of memes, started riffing on it. Take a look at the top post on the subreddit Wednesday:

Further down, someone had posted a screengrab of bea_ker’s original joke, clearly pointing to him as the progenitor of “Thirsty Boy.”

Now the phrase has caught fire, melding with memes of the recent past, like “I haven’t heard that name in years.”

And even the very dead Dat Boi:

But not all of the Thirsty Boy jokes derive from other memes. Some of them are new and bizarre all on their own. This toddler urinal was originally called a “Peter Potty,” but under our new regime of pee-pee terminology, well …

What is so endlessly, breathlessly funny about Thirsty Boy? There’s the juvenile conceit that the urinal is a sentient character who loves to drink piss, which is pretty hilarious on its own. But the Thirsty Boy joke is also reminiscent of other successful concepts that have gone viral.

Last year, a widespread internet campaign attempted to rename fire ants “spicy boys,” a visceral descriptor if ever there was one. Thirsty Boy comes from the same mold of reducing something to a basic, not-quite-literal adjective.

So @bea_ker, in his made-up story, isn’t just meant to be embarrassed because he called a urinal by a childish nickname. He’s meant to be disgraced because he was caught sexually dominating a pee-trough in front of his whole conference audience. That’s the ultimate in awkward.

Now that you’re legally required to call urinals Thirsty Boys, try not to bust up laughing every time you use one or think of someone using one. I think you’ll find it’s pretty difficult.