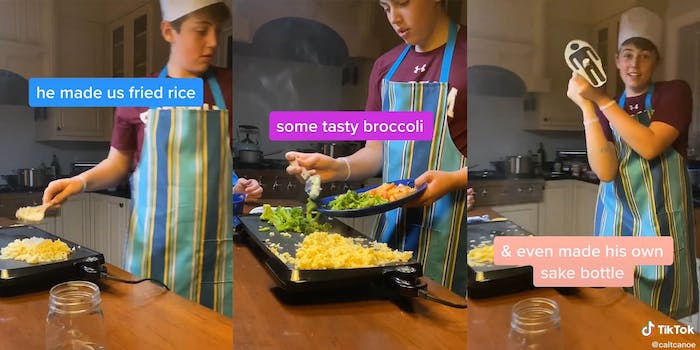 This kid's on fire.

TikTok teens are filming how they’re keeping busy with their families during quarantine. There’s a lot of dance challenges, pranks, and dressed-up family dinners. But TikTok user @caitcanoe‘s quarantine dinners put all others to shame.

Caitlin, @caitcanoe, started filming her brother Derek making themed dinners for their family during quarantine and viewers absolutely loved it. She posted their first dinner March 17 and has since posted nine more dinners.

Derek’s first dinner was “airplane-themed” and involved a flight attendant safety speech, a backdrop of the Sydney Opera House, and chicken marsala for the main dish.

One of Caitlin and Derek’s more popular uploads was Derek’s “hibachi night,” which has over 27 million views and 6 million likes.

Derek dished out sake, ramen, and shrimp and vegetables. He even made his own sake squirt bottle.

“I want to be a part of this family,” one user commented.

“Give this boy his own TV SHOW NOW,” another said.

The Washington Post even asked “When does the restaurant open officially? Was this a soft opening? Please let us know, thanks.”

Derek has made a variety of dishes, including steak, quesadillas, and sausage and peppers.

Another fan-favorite dinner was Derek’s “Hooters theme.” Derek made chicken wings and fried pickles, and the rest of his family dressed to go with the theme. Someone even had binoculars.

The rest of the family has gotten in on the fun filming TikToks with Derek. They even made a Chopped TikTok.

“I like to make [my family] laugh, life’s too serious right now,” Derek told BuzzFeed.

Derek’s dinners have certainly made viewers laugh, and even inspired others to make their own themed dinners.