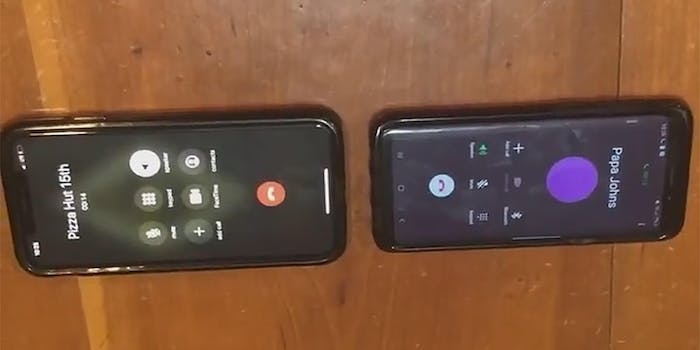 TikTok is a hotbed of memes, but a recent phone prank had some pizza chain employees particularly fired up.

TikTok user @machereford uploaded a 35-second clip that shows one phone placing calling Pizza Hut and another phone calling Papa John’s. The employees at the respective chains answered around the same time with their usual greetings. But confusion ensued after it became clear that another pizza chain was on the other line.

“Uh, you called Pizza Hut on 15th Street. This is Jim how may I help you,” the Pizza Hut employee says.

The video has gained 2.1 million likes on TikTok and 85,000 retweets on Twitter, where it was shared by user @iAmYart.

The Papa John’s employee remained businesslike, but the Pizza Hut employee couldn’t mask his bewilderment. This resulted in one humourous exchange where the employees swapped pizza specials.

“Would you like to hear our specialties tonight? We’ve got an $8.99 pepperoni large pizza,” the Papa John’s employee says.

“Um… we have a $7.99 if you’d like to place an order for that,” the Pizza Hut employee replies, apparently coming out on top.

Many Twitter users posted memes in response. One user even decided to bring another popular pizza chain into the mix.

“Domino’s would have hung up with a QUICKNESS,” Twitter user @lovelyconchas wrote.

Domino’s would have hung up with a QUICKNESS

Hopefully, the pizza chains are just as amused.