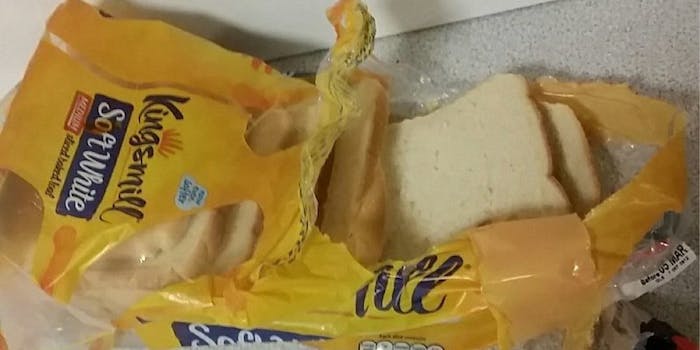 The way this guy’s roommate opens bread horrifies us all

What the hell is wrong with this person?

Most people would open a package of bread by removing the bread clip or twist-tie and pulling slices through the large, bread-sized hole at the end. Most people aren’t the horrifying, uncouth roommate of Scottish Twitter user Al McKay. The unusual way McKay’s roommate opens bread has McKay worried for his physical safety.

One of my flatmates opens their bread like this. I don't feel safe anymore. pic.twitter.com/z0BFhCZNeN

What kind of person would do this kind of violence to a bread bag, savagely ripping open the top and letting in air that will likely keep the food from maintaining its optimal freshness? I’m not a doctor, but maybe a psychopath?

It would be understandable if this was something that had happened once, maybe in a drunken stupor, but McKay explained that the photos in his tweet are from two separate, mangled loaves. Damn.

The reaction on Twitter was a combination of horror and bemusement, with some telling McKay to get out now.

remember you sleep in the same house as that person!

— Carrier of the third plate of food in Masterchef (@Kipplewinker) March 6, 2017

Some people, though, thought this was a perfectly cromulent way to open a loaf of bread. To them, I ask: what is wrong with you?!

It’s truly weird—but also kind of reassuring!—to see how deeply people care about proper bread opening technique. More than 12,000 have retweeted McKay’s photos of the crime scene since he posted them Monday. Nearly 40,000 have liked them.