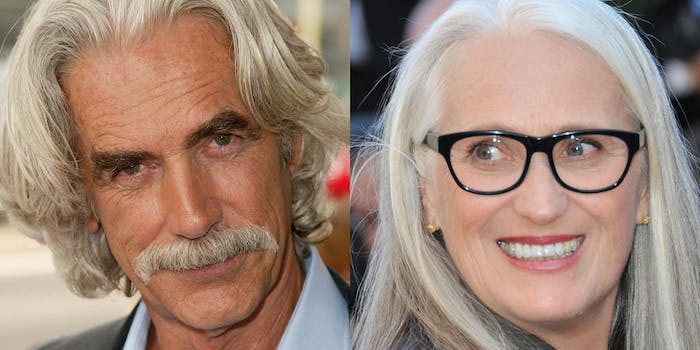 Sam Elliott rants against ‘The Power of the Dog,’ prompting backlash

'There’s all these allusions to homosexuality throughout the f**king movie.'

Netflix’s The Power of the Dog might have the most Oscar nominations of any movie this year, but that doesn’t mean it’s universally beloved. But actor Sam Elliott is raising eyebrows and drawing ire for his comments justifying his dislike of the film that includes homophobic and sexist language.

Elliott, who stars in the Yellowstone prequel 1883, was asked if he’d seen the film by Marc Maron on the WTF Podcast since both 1883 and TPOTD are westerns. But Elliott wasn’t exactly a fan, and as soon as Maron posed the question, Elliott replied, “Do you wanna talk about that piece of shit?”

Elliott mentions seeing a full-page ad for TPOTD in the Los Angeles Times that mentioned the “evisceration of the American myth,” a phrase that made him repeatedly say “What the fuck” in response and compares the cowboys in the movie to Chippendale dancers because of their attire.

“That’s what all these fucking cowboys in that movie look like,” Elliott said. “They’re all running around in chaps and no shirts. There’s all these allusions to homosexuality throughout the fucking movie.”

Maron attempted to counter Elliott’s complaint about the “allusions to homosexuality” by pointing out that homosexuality was a large part of what the film was about. And then he turned his criticism toward director Jane Campion and the fact that she used New Zealand to stand in for TPOTD’s 1920s Montana, something she and her collaborators have been open about.

TPOTD is based on the 1967 novel by Thomas Savage, a closeted gay author who became known for his books about the American West. It’s centered on Phil Burbank (Benedict Cumberbatch), a man who puts on a front of being a cowboy who rarely bathes and acts tough among his colleagues and members of his own family as a way to cover up insecurities about his Ivy League education in front of other ranchers and repress his homosexuality.

Elliott’s issues with the film stem beyond its homosexuality and Campion helming the story. He also complains about Cumberbatch’s character being in chaps all the time, barely riding a horse, and just storming upstairs to play his banjo. “Where’s the western in this western?” Elliott asks, later adding that as someone who’s part of the American myth, “It’s personal, I taking it fucking personal, pal.” Maron tried to interject, eventually noting that TPOTD isn’t trying to be an all-encompassing story—it’s one specific story.

The first part of Elliott and Maron’s conversation about TPOTD went viral as many took to calling Elliott out for sexist and homophobic rhetoric when talking about the themes of the film and Campion’s involvement.

A 2006 Box Office Mojo interview, in which Elliott talked about watching Brokeback Mountain, also resurfaced. He praised the film, but he didn’t consider it to be a Western and noted that “The whole homosexual thing was interesting—they stepped over the line—but Katharine [Ross, his wife] and I both looked at it and thought, ‘what’s the big deal?’”

And naturally, people started making memes about Elliott’s comments and even incorporated his character from A Star Is Born to illustrate some of them.

You can listen to Maron’s full interview with Elliott on WTF Podcast’s website.