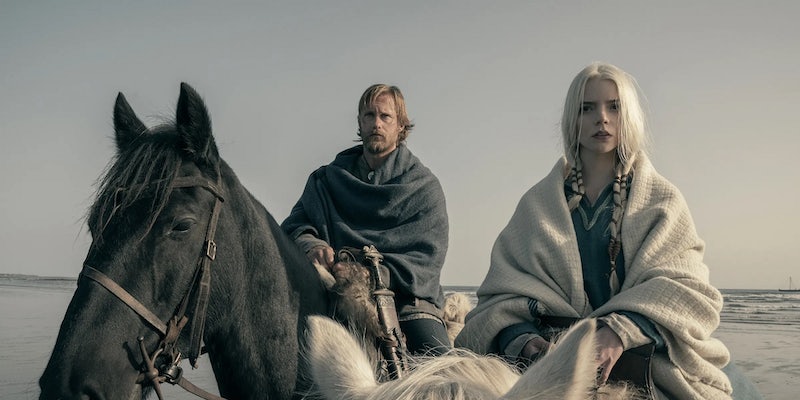 Review: ‘The Northman’ offers a nihilistic twist on ‘Conan the Barbarian’

The director of 'The Witch' and 'The Lighthouse' turns his hand to blockbuster fare, with mixed results.

After the immersive eeriness of The Witch and the ambitious artistry of The Lighthouse, Robert Eggers turns to more conventional fare in The Northman, a brutal Viking revenge thriller based on the story that inspired Hamlet. With gorgeous Icelandic landscapes, grotesque pagan rituals, and dialogue that sometimes sounds like blank verse, it offers the kind of distinctive aesthetic we’ve come to expect from Eggers. However, in some ways, it’s a surprisingly standard kind of historical action epic, with the rather conservative outlook and thin characterization that entails.

Release Date: April 22, 2022
Director: Robert Eggers
Release format: Theatrical release
Alexander Skarsgård plays a Viking warrior in this violent and nihilistic historical revenge thriller, based on the legend of Amleth. After directing ‘The Witch’ and ‘The Lighthouse,’ Robert Eggers expands into big-budget territory – but loses some of his individuality in the process.

Alexander Skarsgård stars as Amleth, a royal heir whose father (Ethan Hawke) is murdered by his own brother (Claes Bang), stealing both the kingdom and Amleth’s mother (Nicole Kidman) in the process. Amleth naturally vows revenge, a vendetta that shapes the rest of his life. If you’ve seen the original Conan the Barbarian, much of what unfolds will feel oddly familiar—a comparison that Eggers directly acknowledges. This is gritty, nihilistic Conan.

Amleth becomes a berserker, one of the legendary Norse warriors who worked themselves into a frenzy of rage before battle, rendering them superhumanly strong and immune to pain. A handy skill because they fight semi-naked, exposing their very 21st-century gym physiques. In one memorable scene, we see the berserkers dancing around a fire while a gnarled old priest grunts out a rhythmic chant about wolves. It adds a certain gravitas to the sort of behavior we typically see from drunk, violent sports fans, caught up in a kind of mass hysteria of masculine fury.

Warped by childhood trauma and a single-minded obsession with vengeance, Amleth’s emotions typically function like an on/off switch: “violent rage” or “standby.” Completely understandable in context, given the way this film uses mythological tropes to depict an inescapable cycle of violence. But not necessarily conducive to creating an interesting character. Amleth is neither as emotionally compelling as the protagonist of a film like You Were Never Really Here (starring Joaquin Phoenix as a man broken by his violent past), nor entertaining in the way of straightforward action heroes like John Wick. Amleth is simply grim.

This lack of psychological depth is perhaps why I found my attention wandering to the margins to engage with the inhabitants of Robert Eggers’ bleak Scandinavian world. A bad idea, because as soon as you sympathize with the women in the background of Amleth’s quest, you become distractingly aware that most of them are being raped. This includes Amleth’s love-interest Olga (Anya Taylor-Joy), a Russian sorceress who is depicted as being “tough enough” to withstand and/or avoid sexual violence. Which obviously implies that the other women are just weak, in the same way that Amleth’s hulking strength puts him on a different plane from the men around him.

The Northman is at its best when things get mystical. Amleth is propelled by the instincts of destiny. Assisted by a delightfully creepy witch (Willem Dafoe), he sees visions of his fate. A seer, played by Björk at her Björkiest, gives him guidance on his quest. There’s a very cool magical weapon and a prophecy that must conclude at “the gates of Hel.” Both visually and in the buzzing, throbbing folk/ambient soundtrack (Robin Carolan and Sebastian Gainsborough), Eggers understands how to draw his audience into this mythic setting.

In the same way that The Witch bought into the superstitions and prejudices of 17th-century Puritanism, The Northman embeds itself in the mindset of a Viking saga. In that sense, it’s surprisingly similar to last year’s The Green Knight, which shares a similar combination of artistic prestige and deceptive conservatism. Unlike the typical storytelling method of translating ancient myths to fit with modern sensibilities, both films try to embrace the philosophy of their source material, be that medieval chivalry or the necessity of avenging one’s royal father. However, I’d argue that they don’t go far enough. While far more creatively ambitious than a typical blockbuster, The Northman follows very familiar restrictions.

Our culture has an endless capacity for tales about angry men committing violent acts; less so for the parts of these ancient stories involving revelry, romance, and in the case of so many Norse tales, wit and psychological warfare. For instance when Olga volunteers her ability to “break the minds” of Amleth’s enemies, very little of her involvement is actually shown onscreen.

Modern sexism shines through, most obviously in the way these characters are physically portrayed. As ever, men are lank-haired and muddy while the female leads (Kidman and Taylor-Joy) might as well be starring in a perfume commercial. Taken in isolation, this all makes sense. From Amleth’s perspective, the world is a cruel, miserable, and filthy place, with the beautiful Olga representing a potential reprieve. In a wider context, though, this is a pretty tired dynamic, right down to the modern insistence that Viking men must be unkempt while their female counterparts are perfectly coiffed—going against the historical record of Norse invaders being famously hygienic.

With its gorgeous cinematography (Jarin Blaschke), ominous mysticism, and some great material for actors like Willem Dafoe and Nicole Kidman, The Northman has plenty to offer. However, I’m inclined to think that Robert Eggers works better on a smaller scale. The Northman‘s most expensive elements—big fight scenes, sea voyages, and the like—are often its least interesting.