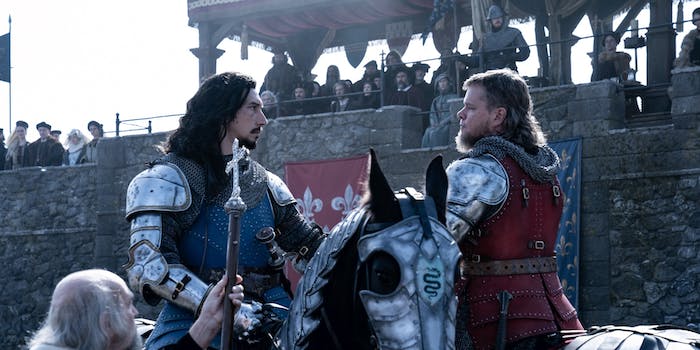 Ridley Scott’s ‘The Last Duel’ is a bloody, intelligent historical drama for adults

The Last Duel‘s creative team includes some eyebrow-raising choices for a gritty historical drama about rape. Director Ridley Scott joins forces with screenwriters Ben Affleck, Matt Damon and Nicole Holofcener (Can You Ever Forgive Me?) to tell a sprawling medieval epic about a rape accusation that results in a duel between the alleged rapist and the accuser’s husband.

Yes, this is the same Matt Damon who expressed notably tone-deaf opinions on #MeToo, and the same Ben Affleck who has a history of groping women and supporting men accused of sexual misconduct, including his own brother Casey Affleck. And yes, this film largely focuses on two men’s responses to a woman’s alleged assault. But while this sounds like a recipe for disaster, The Last Duel is intriguingly nuanced: A thrilling, well-balanced, and surprisingly amusing film that makes good use of its 2.5-hour runtime, providing expansive context for the power dynamics at play.

RELEASE DATE: Oct. 15, 2021
DIRECTOR: Ridley Scott
RELEASE: Cinematic release
Set in medieval France, this epic historical drama explores a conflict between two noblemen (Matt Damon and Adam Driver), one of whom is accused of rape by the other man’s wife (Jodie Comer).

Set in 14th-century France, The Last Duel is based on a nonfiction book about a true event, the last legally recognized trial by combat in French history. Matt Damon leads the cast as Jean de Carrouges, a minor nobleman who excels on the battlefield but is too hotheaded for political success. Adam Driver plays his former friend Jacques Le Gris, a more socially competent man who climbs the ranks by befriending the local ruler Count Pierre d’Alençon (Ben Affleck, in a hilariously ballsy supporting role). When Jean’s wife Marguerite (Jodie Comer) accuses Jacques of rape, this leads to the titular duel.

After Gladiator, Kingdom of Heaven, and Robin Hood, Ridley Scott has plenty of experience with historical epics. The Last Duel‘s battle scenes are compellingly gory, and the setting hews close to medieval genre tropes, particularly its miserably grey color palette. (According to Hollywood, bright colors are a mark of unrealistic frivolity in Olden Times. In reality, black dye was prohibitively expensive in medieval Europe, whereas colorful clothes and tapestries were very fashionable.) The dialogue is often stilted and expository (“You will inherit your father’s garrison… and I am your friend,” Adam Driver intones.), although in fairness there’s a lot to explain. And of course, there’s an absurd aesthetic divide between the men (scarred and bedraggled) and the women, who have flawless skin, teeth, and hair. When Count Pierre hosts an orgy, the nude girls cater to the Game of Thrones demand for 21st-century beauty standards. Ridley Scott has no interest in subverting these tired old habits of the genre, so it’s really just as well that the story is good.

Echoing the classic Japanese film Rashomon, The Last Duel shows us three perspectives of the same event. When recalling the backstory for Marguerite’s alleged rape, Jean and Jacques focus on their own personal conflicts, bound up in land disputes and macho posturing. They also offer different views of Marguerite’s reliability and loyalty as a wife. Only then do we see Marguerite’s side of the story, making it abundantly clear that neither man views her as a human being with a distinct personality or desires.

Affleck and Damon both got ridiculous haircuts for this movie, but while Damon’s ragged mullet looks appalling, Affleck carries off his bleach-blond goatee with panache. He’s one of those actors who just doesn’t feel plausible in a historical context, and he resolves this by playing Pierre in a modern style. While Adam Driver swirls his cloak around and drops references to medieval courtly love, and Matt Damon hacks people to pieces with a broadsword, Affleck plays Pierre as a fratboy with a lopsided smirk. “The common mind has no capacity for this kind of nuance,” he drawls when Jacques Le Gris tries to explain the nitty-gritty of Marguerite’s accusation. This self-absorbed idiot thrives at the top of the patriarchal food chain.

The Last Duel feels like a rarity in this day and age: A massive, expensive movie aimed directly at adults instead of PG-13 blockbuster audiences. It’s entertaining but serious, balancing blood-pumping combat with slyly cynical examinations of consent, gender dynamics, and ego-driven male rivalries.

As you might expect, Marguerite’s role is not as meaty as her male counterparts. We sympathize with her, but the film is more interested in dissecting the ways in which men control her life. The Last Duel‘s styling choices are a genuine problem here, I think. When we see things from Marguerite’s perspective, why not make Jodie Comer look messy and flawed, pushing back against her image as an idealized beauty? But that’s probably too much to expect from Ridley Scott. The film otherwise plays to his strengths, delivering an epic story with A-list star power and real emotional weight.