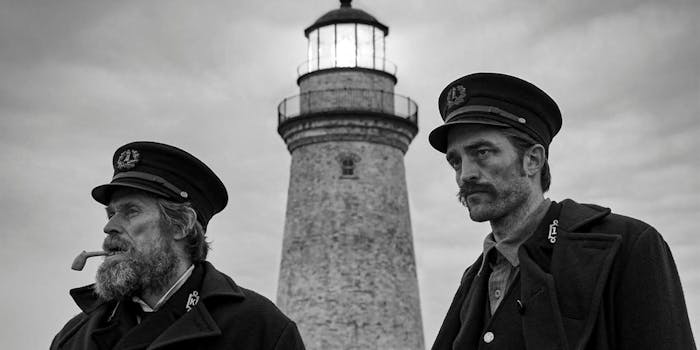 Historical drama ‘The Lighthouse’ is stinky, anarchic, and gloriously weird

The Lighthouse has got to be one of the smelliest films ever made. Set on a remote island, it stars Robert Pattinson and Willem Dafoe as a pair of 19th-century lighthouse keepers who spend most of their time hungover, covered in coal dust, and/or splattered with bodily fluids. It makes you heartily glad to live in a world with hot running water and readily available soap.

Writer/director Robert Eggers made his name with The Witch in 2015, a 17th-century horror story that used natural light and carefully researched Puritan dialogue to create an immersive historical setting. The Lighthouse is even more ambitious in its attention to detail. Filming in black and white (and in the square-ish 1.19:1 aspect ratio that died out in the 1930s), cinematographer Jarin Blaschke used vintage lenses and filters to create a quality of light that simply isn’t seen in modern cinema. It’s perfect for the sooty murk of the cottage where Thomas Wake (Dafoe) and Ephraim Winslow (Pattinson) are stuck for the duration of the film. Plus, the dramatic lighting pairs well with two of the most angular faces in Hollywood. Dafoe unearths new levels of cragginess, while Pattinson’s bushy mustache transforms his cheekbones from Hollywood heartthrob to gaunt 1890s laborer. The grain of their skin is tangible in a way that instantly sets The Lighthouse apart from our typical view of poreless, wrinkle-free movie stars.

Ephraim is a new apprentice while Thomas is a curmudgeonly old sea dog, speaking like a cross between Captain Ahab and Long John Silver. Co-written by Eggers’ brother Max, The Lighthouse’s dialogue is a delight. It’s packed with colorful historical language (instead of telling Ephraim to scrub the floors, Thomas orders him to “swab, ye dog!”) and delicious turns of phrase like Ephraim screaming that Thomas smells like “curdled foreskin.” There’s a definite hint of Samuel Beckett here, combined with a silent-film-era aesthetic and a voracious appetite for the absurd. When a storm prevents the two men from ending their four-week stint on the island, their tense partnership descends into a bitter (and often comically petty) feud.

One of the biggest surprises of The Lighthouse is its sense of humor. While The Witch was relentlessly grim, The Lighthouse is full of slapstick punchlines, stupid arguments, and fart jokes. It co-stars a flock of mean seagulls and revels in the inherent comedy of impotent rage. Even when things go seriously wrong, there’s a kind of morbid hilarity to the chaos. Starting off as the more taciturn and sympathetic of the pair, Ephraim evolves into something reminiscent of Daniel Day Lewis in There Will Be Blood, exploding with rage that simultaneously provokes laughter and alarm.

There’s no such thing as true historical accuracy. Dramas like The Crown and Mad Men are often praised for their meticulous production design, while films like Master and Commander made efforts to cast actors who didn’t look “modern.” But in the end, every piece of historical fiction is still filtered through layers of political bias and contemporary beauty standards, arranged into a digestible narrative for modern audiences. Robert Eggers (a former production designer) is a particularly interesting historical storyteller because he’s an obsessive researcher who aims for unusual levels of detail, but neither of his films are necessarily “realistic.”

While The Witch and The Lighthouse both embrace the filth and grueling drudgery of their settings, they also include fantasy elements. In the case of The Witch, that meant accepting the superstitions of 17th-century Puritan life, depicting a world where devil-worship is as real a danger as hunger or disease. The Lighthouse opts for a more stylized tone, influenced by early cinema, maritime folktales, and even Freud. Bizarre dreams (a fixture of the silent film) plague Ephraim from the start.

The Lighthouse is sure to be divisive, not because it has controversial themes but because it’s so aggressively provocative. It’s a film that pokes and teases the audience, much like how the two leads rub each other the wrong way, careening off into violence and hysteria as stormclouds boil overhead. Mark Korven’s soundtrack is gloriously unpleasant, roaring and booming along with the crashing waves and the island’s foghorn—and Thomas’s audible farts. Strings skitter and lurch into an atonal wail. The whole experience is designed to keep you on your toes, offsetting the absurdity and discomfort with moments of looming gothic beauty. And it’s all anchored by two feverish performances from the best possible actors you could imagine for these roles.

Sharing an uncomfortably intense and waterlogged film shoot, it sounds like the actors’ experiences mirrored what happens to their characters onscreen. Dafoe, a man with 130 film credits under his belt, slid confidently into his role as the master of a weird little kingdom. Meanwhile, Pattinson—still neurotic about transitioning from teen stardom to art cinema—embraced method acting as the inexperienced Ephraim, making himself sick and putting stones in his shoes to keep himself off-balance. Despite their diverging techniques, both stars are known for their anarchic attitudes: Pattinson being notorious for his trollish attitude during interviews, and Dafoe as the veteran of numerous wild and experimental films. They seem to share an instinctive understanding of the goggle-eyed madness required for The Lighthouse, along with the skill to deliver poetic dialogue in peculiar historical accents. Caught up in all that chaos and grotesquery, it’s easy to forget the level of precision necessary to make everything slot into place.

Praised on the festival circuit, The Lighthouse might fair a little differently on general release. People expecting a horror movie like The Witch may be disappointed. People who signed up for a grim historical drama may be shocked. But for many, it will hopefully be a welcome surprise. Like salt on a dessert, The Lighthouse is an acquired taste.

The Lighthouse comes out in theaters on Oct. 18, and is currently screening at the London Film Festival.