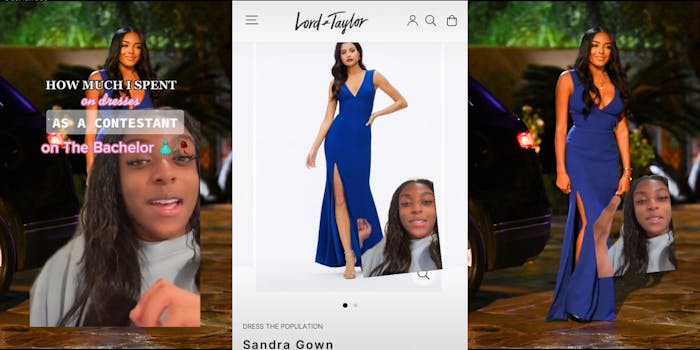 ‘I had no idea you had to buy your own dresses’: ‘Bachelor’ contestant reveals how much she spent on clothes for the show in viral TikTok

'Naw everything would’ve came from Shein.'

A former The Bachelor contestant revealed how much she spent on clothes for the TV show in a viral TikTok. Show contestants are reportedly required to pay for their own dresses, hair, and makeup.

Daria Rose (@daria.rose) shared pictures of each of the dresses she bought for the show and revealed much they cost. Rose was a contestant on season 26 of The Bachelor and got eliminated in the first week.

Rose’s video received about 1.6 million views on TikTok as of Tuesday. The TikToker has about 39,000 followers on the platform.

Rose says she bought the dress that she wore for her first-night entrance for $198. Another dress that she didn’t even wear on the show cost her $219.

In the video, Rose shows five other outfits she bought, their prices ranging from $285 to $420.

In total, the contestant says she spent $2,238 on seven outfits for the show, and that excludes whatever she spent on hair and makeup.

“Very expensive, so um, if anyone needs to borrow a dress, let me know,” Rose says in the TikTok.

Many viewers couldn’t believe that The Bachelor contestants were really required to pay their own way on the show.

“no WAY they make you pay for your clothes AND makeup,” one viewer said.

“Sheesh I thought y’all got sponsorships/partnerships with brands or something,” another wrote.

“I had no idea you had to buy your own dresses,” a third commented, to which Rose replied: “Some of the girls end up sharing/swapping towards the end of the season!”

Several viewers said that if they were a contestant on The Bachelor, they would have ordered their outfits from Shein, an online fast-fashion retailer known for its cheap prices.

“Naw everything would’ve came from Shein,” one TikToker commented. Rose wrote in response that she wanted to buy from only Black-owned companies but that her orders wouldn’t have shipped in time.

Rose did not respond to the Daily Dot’s request for comment via email. The Daily Dot also reached out to ABC, which produces “The Bachelor.”