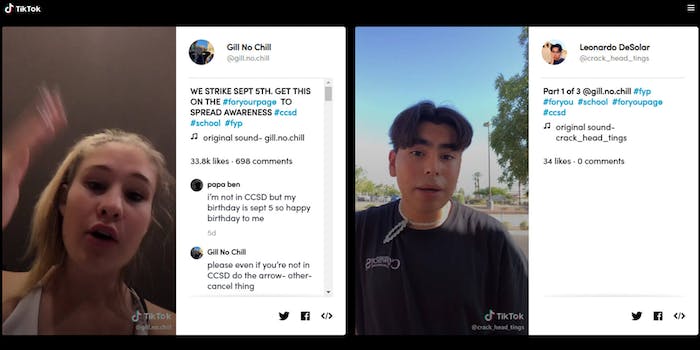 Students are showing support for a strike in Clark County, Nevada.

Students in Nevada’s Clark County are using TikTok to show support for underpaid teachers and highlight major issues in their school district.

Writer and vlogger Klaudia Amenábar highlighted one video from TikTok user Gill No Chill, encouraging students in the Clark Country School District to strike on Sept. 5 in solidarity with teachers who were led to believe they would receive raises if they participated in a professional development program. The teachers union has threatened to strike on Sept. 10, though the CCSD has filed an injunction to prevent the strike, according to the Las Vegas Review-Journal. Public employees can’t legally strike in the state of Nevada, though an April 2019 poll of 5,000 union and non-union teachers revealed 94 percent were willing to.

These kids on tiktok are organizing a general strike in solidarity with their teachers? Holy shit? pic.twitter.com/h1Rny03xwc

In a follow-up video, Gill No Chill addresses some of the comments on the previous video, in which teens from districts in other parts of the country sounded off about the issues their schools are facing as well. “Nationally, the school system is broken,” she says, “and we can fix it by not going to school and the government realizing that we all see a problem as teenagers.”

Elsewhere, user Leonardo DeSolar highlighted some of the funding issues in the district, and the frustrations teachers and students are feeling.

User quakespeare highlighted issues with the district as well, including a data breach earlier this month that affected more than 550,000 students.

The teachers union and the school district have agreed to mediation as of Tuesday, and a statement from the CCSD stated it is “hopeful that an agreement can be reached in the coming days to ensure our hard working support professionals receive the compensation they deserve.”