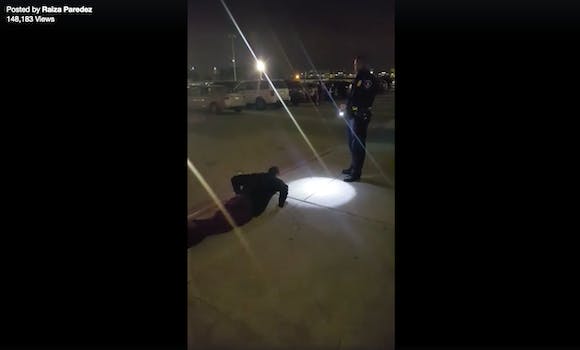 Police officer has unconventional punishment for a teen busted with weed

At least he got a workout in.

On Thursday, an Arlington, Texas, police officer gave a perpetrator in possession of marijuana a not-so-threatening sentence. In a video that’s circulating social media, a cop towers over a teenager after ordering him to drop and give him push-ups as an alternate sentence for jail time.

Local officials identified the police officer as Eric Ball, who was apparently working off duty when he caught the teen smoking weed outside a movie theater.

Lt. Chris Cook with the Arlington police stated that the unidentified, 17- or 18-year-old did not show any signs of disrespect toward Ball, understanding that he had made a mistake smoking on the property.

Instead of arresting the boy, Ball decided to take an alternate route to discipline. According to Cook, Ball said, “You give me 200 push-ups, I won’t put you in jail.”

According to Cook, Ball had played high school football and decided to apply the methods of discipline used on him as a teenager on the boy. The teenager’s mother was later found inside the movie theater, and once notified of the officer’s decision not to arrest and instead punish him with push-ups, she hugged and thanked him.

According to Cook, the mother told Ball that she didn’t find the given punishment enough, and would have made him do more push-ups.

A video of the has been shared by Raiza Paradez on Facebook, where it has been viewed over 148,000 times and shared over 1,700 times.

Ball is shown standing nonchalantly with his flashlight on, observing the teen as he goes from doing traditional push-ups to push-ups on his knees.

Many commenters have expressed praise for the officer, and some on Twitter are also having a laugh.

I hope if he did the 200 push-ups he'd still get to keep his weed https://t.co/GEgcYKTjNF

The teen may not have faced the big metal bars, but he did face some serious physical obstacles. Shout out to Officer Ball.