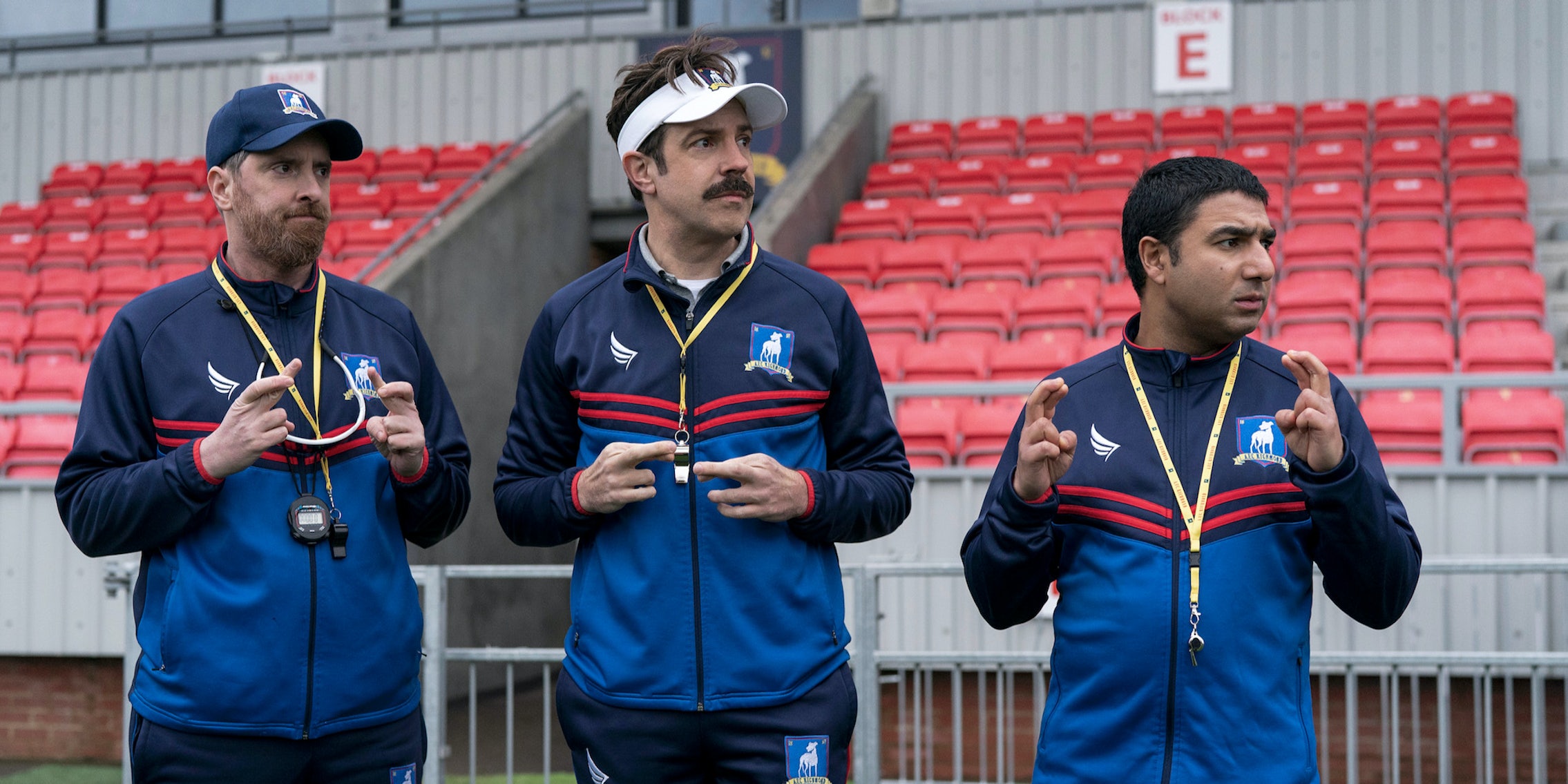 ‘Ted Lasso’ is thoughtful and delightful in season 2

It's also challenging the premise of what made people fall in love with it.

It would be so easy for Ted Lasso—which became Apple TV+’s most unlikely success story last year after it turned into a genuine word-of-mouth hit at a time when people were searching for comfort watches—to play it safe. The character of Ted Lasso, played to mustachioed perfection by Jason Sudeikis, originated as part of NBC Sports’ attempt to promote the Premier League to American viewers in 2013, and with a few tweaks and several years later, Sudeikis and Bill Lawrence (Scrubs) made him the star of a TV show. The titular Ted Lasso was still as much the clueless American football coach brought to London to coach soccer, a sport he’s never played, but he was much kinder and more optimistic than the NBC Sports counterpart ever was. He was a walking, talking Dad joke who wore his heart on his sleeve and often unnerved his cynical British colleagues, but Ted Lasso could also surprise you with its helpings of melancholy.

Release Date: July 23, 2021
Creators: Bill Lawrence, Jason Sudeikis, Brendan Hunt, and Joe Kelly
Streaming: Apple TV+
While just as delightful as its first season, ‘Ted Lasso’ season 2 isn’t afraid to pull back the layers to examine the psychology of the optimism it’s become famous for, which is partly prompted by the introduction of a sports psychologist to aid AFC Richmond during their first season after being relegated to a lesser league.

Miraculously, Ted Lasso’s charm offensive slowly broke down those walls and won over curmudgeonly veterans, hotshots, and even AFC Richmond owner Rebecca Welton (Hannah Waddingham), who hired Ted in hopes that his ineptitude would destroy the team (a form of revenge against her shitty ex-husband), over the first season. If season 2 had solely consisted of that same optimistic outlook, it would’ve made sense because it’s easy to stick with what works; it would’ve likely been very funny.

What Ted Lasso realized is that the original premise of Ted Lasso wouldn’t work forever; Ted Lasso’s folksy optimism loses a tiny bit of its charm when there’s no conflict, and we even see a bit of this play out in the season 2 premiere. Instead, what Ted Lasso does is peel back that sheen of its cheerful exterior to make us examine the limits of that optimism. As a result, it’s thoughtful and existential but no less of a delight. (I’ve seen eight of season 2’s 12 episodes.)

At the start of season 2, AFC Richmond is out of the Premier League, and the team has adopted the Ted Lasso way: They genuinely seem to get along, just about everyone is nice to each other, and whenever a game ends in a tie (as the first seven matches of Richmond’s season do), they take Ted’s advice to act like a goldfish and forget about it. And it sidesteps COVID-19 completely; it’s just not a thing in Ted Lasso’s universe.

The arrival of Dr. Sharon Fieldstone (Sarah Niles), a no-nonsense sports psychologist hired to observe and help out the team, provides the first true test of Ted Lasso’s infectious optimism—and the first nut he truly cannot crack. Sharon cuts Ted off before he can utter one of his many Midwestern colloquialisms and keeps things polite but professional as she helps many of the players address their fears or insecurities. Sharon doesn’t eat sugar, so she can’t be swayed by Ted’s homemade biscuits. She even goes as far as to point out that even though the team might be operating on the same wavelength, it hasn’t gotten them any closer to winning a match.

Ted is just as wary of Sharon, even when her methods are legitimately helping the players. He’s not necessarily obstructive, but he might dissuade his fellow coaches from calling Sharon to help a player with a lapse in confidence. Or, when the team isn’t getting along with each other, he’ll bring out “Led Tasso,” an alter ego that’s something of an aggressive, albeit amusing, monster that manipulates the team into making him the common enemy while getting them to work together (and is a textbook example of reverse-psychology).

We already know that the shiny veneer of the Ted Lasso mythos has cracks. Ted took a job located thousands of miles from his wife and son in part to save his marriage, and by the end of season 1, that marriage was over. In a later season 1 episode, a panic attack demonstrated just how much pain Ted is trying to hide from those he loves. But season 2 begins to reveal more of Ted’s many complications, including some of his own self-destructive tendencies all wrapped up in a Midwestern folksy sandwich.

The rest of AFC Richmond, both past and present, have their own set of complications ahead of them. With her own divorce behind her, Rebecca attempts to put herself out there and date again. No longer the show’s primary antagonist, Rebecca is able to swerve alongside Richmond, but she’s still the steely boss whose sternness can invoke fear into her enemies. Keeley Jones (Juno Temple), now in charge of Richmond’s marketing, and retired footballer Roy Kent (Brett Goldstein) fall into a groove with their relationship. Kent, who no longer has the game he devoted his life to, flounders a bit and initially takes up a coaching gig with his niece’s soccer team (which mostly results in him cursing out a group of young girls, all of whom seem to utterly adore him). But Keeley, who saw past Roy’s defensive walls last season, gives him the gentle nudges he needs to explore other, more satisfying opportunities. Nathan Shelley (Nick Mohammed) is settling into his new role as Richmond’s new assistant coach, but he sometimes teeters on the edge of taking things too far, especially when it’s directed toward the person who took over his old job.

Some of the more joyous scenes of season 2 take Ted Lasso completely out of the equation and focus on Richmond’s footballers bonding or coming together to support a common goal. Sam Obisanya (Toheeb Jimoh) and Dani Rojas (Cristo Fernández), two bright spots on the team last season, are among the players given more of the spotlight this time around as they’re each faced with their respective moral crisis. Higgins (Jeremy Swift) gets to be more than a punching bag for Rebecca, although a subplot involving his increasingly creative search for somewhere he can work in AFC Richmond’s building after letting Sharon take over his office gets funnier the longer it transpires. But Higgins also, in some ways, becomes an unexpected but thoughtful moral compass.

In season 2, the writing is just as sharp and the cast has an even better grip on their characters, often resulting in surprising yet delightful team-ups and the delivery of hard truths. In typical holiday fashion, Ted Lasso’s Christmas episode (a staple of British TV) is a perfect example of how it blends the cheer with the bittersweet melancholy. The show takes aim at everything from British TV and more of soccer’s more inane rules to dating apps and it highlights the importance of the family you’re born with as well as the family you make.

There are plenty of wins and losses in Ted Lasso, some of which arrive in unexpected places; it’s not just on the pitch. But even if the optimism of Ted Lasso might be a bit more complicated now, the show is still, at its core, about trying to become a better person in a world that’s indifferent or tries to discourage it—and even having a bit of fun along the way.