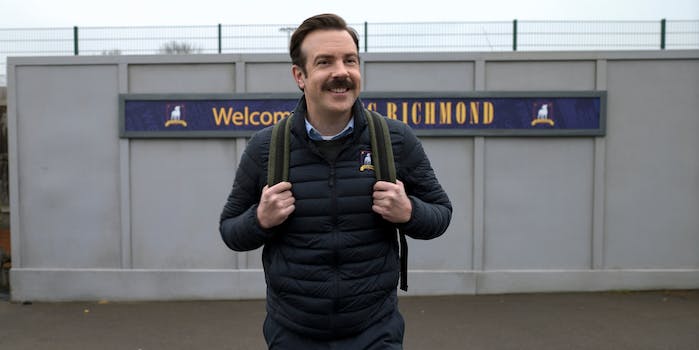 Plus 'Mulholland Drive' at 20 and a look at what's streaming in September.

We’re officially halfway through Ted Lasso’s second season, and the show that was once barely a blip on Apple’s release schedule (or, given the origins of the Ted Lasso character in an NBC Sports promo, was seen as an indication that TV execs have run out of ideas) is a critical and commercial success—and an Emmy frontrunner. Often cited as a salve during the pandemic, it was lauded as comfort TV as we were embedded into the life of American-football-turned-British-football coach Ted Lasso (Jason Sudeikis) and the people within AFC Richmond’s orbit, even though it didn’t shy away from depicting melancholy or showing us how even Ted’s prescription of absolute niceness can be toxic. (It also made more American viewers aware of Hannah Waddingham for much more than playing “the Shame Nun” on Game of Thrones.)

Granted, Ted Lasso was never universally lauded. Some viewers found the show that garnered so much praise to only be “fine,” or they were turned off by the show’s niceness, or they just didn’t find it funny. But over the past few weeks, starting around the release of the saccharine Christmas episode “Carol of the Bells,” the backlash to Ted Lasso’s second season has, at least online, grown exponentially (and apparently made one Emmy voter think twice about voting for the show). Warning: This newsletter contains spoilers for Ted Lasso.

There have already been more than enough explainers and thinkpieces about the Ted Lasso backlash, so I won’t bore you with paragraphs about the specifics. You can read plenty about how the show isn’t funny, doesn’t have any conflict, isn’t building upon the conflict, or how season 2 might have benefited more from the binge model. Some critics who had watched the first eight episodes of season 2 even noted that the backlash over Ted Lasso’s lack of conflict was premature because the other shoe was just about to drop.

Whether or not you think Ted Lasso is funny is subjective, but at least one point of conflict has boiled over. In episode 6, “The Signal,” Ted had a panic attack and left his team during the final minutes of AFC Richmond’s FA Cup quarterfinal against the Tottenham Hotspurs, which had the immediate effect of Richmond temporarily losing its lead against the Hotspurs. While it turns out OK for Richmond, the episode’s final moments bring us back to Ted, who’s hiding in the office of the team’s sports psychologist Dr. Sharon Fieldstone (Sarah Niles) so he can tell her he was finally ready to make an appointment, something that the therapy-averse Ted had been avoiding all season.

I’ve watched up to episode 8 thanks to screeners, so I’ve seen where some of where these threads lead (and overall, I’m a fan of what the show’s trying to do). Will they work for everyone? Not necessarily, but I found those episodes—which, at the very least, give Niles much more to do and a bigger Roy Kent (Brett Goldstein) and Keeley (Juno Temple) subplot—to be utterly fascinating. Even “The Signal,” which tried to preemptively address some of the criticism about the show well before it showed up, didn’t work for everyone: My mom, who loves Ted Lasso, bemoaned, “I thought this show was supposed to be funny.”

If you feel lost in an ocean of streaming services, Hulu is a great starting place

With so many options on the market, streaming can be overwhelming. But if you want a mix of TV and movies, with the option for live channels too, Hulu is what you’re looking for.

From groundbreaking FX exclusives like Reservation Dogs to the latest Bob’s Burgers, there’s always something to watch. We’ve got the answer to all your questions so you can start streaming.

One of my first impressions of David Lynch—a filmmaker who I’m aware of but, until this week, whose work I had never seen—is that he won’t explain his work to people. Every so often, a photo or a screengrab from an older interview will pop up on Twitter showing Lynch saying something about one of his films such as Eraserhead, Blue Velvet, or Mulholland Drive, or his seminal TV series Twin Peaks. Whenever he’s asked a question to explain what he means or what he’s trying to convey in a project, Lynch refuses to answer. It’s happened often enough that a supercut of Lynch’s very polite deflections exists.

It’s with this image of Lynch that I finally checked out Mulholland Drive, a film that won Lynch a directing prize at Cannes in 2001 and got him an Oscar nomination for best director. I had very little context for it other than that it starred Naomi Watts and Justin Theroux, it was set in Los Angeles, and a 2016 BBC critics poll deemed it the best film of the 21st century. It’s also turning 20 this year. (I found a couple of 20th-anniversary screenings this week in New York City; it’s also streaming on Showtime.)

Watching Mulholland Drive is something like a fever dream; you’re not really sure what’s happening as it’s happening, and depending on your mood, the entire plot of the movie can change. I could explain what happens in Mulholland Drive beat by beat and still not really convey the full scope of the film. Within about 10-20 minutes of finishing it, I went from “What the hell did I just watch” to Googling the many interpretations of the film, feeling blown away at how well each of them worked, admiring the audacity of its ambiguity (especially in a world where filmmakers tend to be on-hand to explain the end of their movies right after they’re released), and landing on “David Lynch is a mad genius.”

“This is a movie to surrender yourself to,” Roger Ebert wrote in his 2001 review of Mulholland Drive. “If you require logic, see something else.” I don’t yet know if this is typical of a David Lynch project, but I’m anxious to find out: I’ve already been recommended Blue Velvet and Wild at Heart by some of my colleagues, and I think I might finally dive into Twin Peaks.

Now Playing: “I Saved the World Today” by Eurythmics