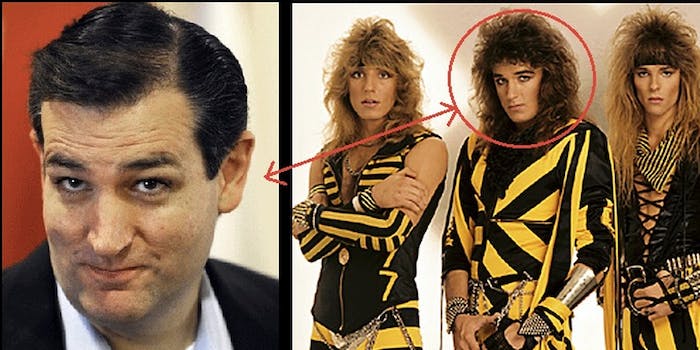 Have you ever seen them together?

Presidential candidate and suspected Zodiac Killer Ted Cruz may be hiding another dark secret from the American public. Is he actually the lead singer of pioneering Christian metal band Stryper?

You’ve got to admit, it’s a compelling theory. Ted Cruz was a Christian mime in high school, so a leap into this black-and-yellow striped racing costume, isn’t so farfetched, right? And, unlike Cruz and the Zodiac Killer, Cruz and Stryper lead singer Michael Sweet are less than 10 years apart in age. They’re both about the same height, too.

So I guess my doppelgänger is @tedcruz? Guess I better cancel the @Stryper tour so I can focus on my campaign;-) pic.twitter.com/3ODcvA0Bjd

Seriously, though: Ted Cruz is not metal. I compared a list of Stryper tour dates to Ted Cruz’s public appearances, and the two men have consistently been in different places at different times.

For example: On Aug 9, 2014, Stryper were in Spain for the Legends of Rock festival.

Cruz was looking at a cow made of butter.

Wow, a cow made of butter. My girls would love it. In fact, the first sentence Caroline ever said was "I like butter" pic.twitter.com/TzBZJmVFKT

Sweet also denied the accusations that he is Cruz in a statement to the Daily Dot:

It always amazes me how often posts that really matter never see the light of day, yet some wannabe comes along and posts something that is so ridiculous yet it goes viral? Twisted, yet the way it is. If I’m the real Ted Cruz, then maybe Robert is Donald Trump, Tim is Hillary Clinton and Oz is Marco Rubio? Wow! Is it true??? Hmm……

Besides, Cruz favors show tunes and is known to be a horrible singer—unfortunately for his wife, to whom he frequently sings over the phone.

Sweet declined to comment on the broader dynamics of the 2016 presidential election, but on Twitter, he implied that he’s not a supporter of the Texas senator. When a fan said Sweet shouldn’t be proud of being compared to Cruz, Sweet replied “Who said I am? ;-)”

Here’s his only political stance, which, depending on your opinions of the current candidates, may mean he’s not voting at all:

It looks like Stryper’s fans are taking this Cruz thing a lot harder than Stryper’s frontman is, though. Here’s a post from the Facebook fan group STRYPER STRONG (it’s since been deleted):

Ok, we’ve all now seen at least a dozen times the Ted Cruz looks like Michael in one photo from 1983. I’ve been tagged, had it forwarded to me and have deleted countless postings on the Stryper page that I am webmaster for. First, stop it! Second, it’s making fun of the band and my best friends. Third, it’s making fun of anyone who dares be a fan (in other words….YOU). I don’t like ANY of that! I discussed this with Michael the day he posted it and the only reason he posted was because of the free press that comes from it. He didn’t like the post either and removed the original persons name from it. It has now grown to the point of being ridiculous. So, can I ask everyone to not post it anymore and to move on? Can we all agree on that? Can I get a like or comment of agreement on this? Sorry, it isn’t funny anymore. (Never was).

It… was a little bit funny.

Senator Cruz’s campaign did not respond to a request for comment.