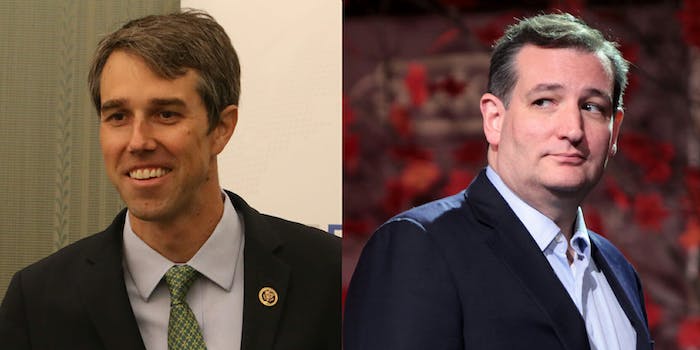 Clearly many people online can relate to looking at pictures of O'Rourke on their phones.

Photos of Sen. Ted Cruz (R-Texas) looking at a photo of his Democratic challenger Rep. Beto O’Rourke have sent the internet into yet another frenzy in a race that has, so far, produced numerous meme-able moments.

The race between O’Rourke and Cruz has intensified in recent weeks, with recent polls showing the incumbent senator leading his challenger by just 4.5 points, according to Real Clear Politics. With the race so close and grabbing so much attention, it has been at the center of the political world.

Cruz’s campaign has attacked the Democrat for cursing too much and has been criticized for taking comments he’s made about flag burning out of context. The Texas Republican party also tried to use an old mug shot of O’Rourke to drum up support for Cruz, which backfired immediately.

The senator has also been criticized for attacking O’Rourke’s nickname despite using one himself.

But the latest internet attention-grabbing moment of the race is maybe the best. It came on Tuesday morning, when Cruz was spotted looking at a photo of O’Rourke on his phone while on a plane.

It’s not shocking that they drew the attention of people on Twitter, who quickly cracked jokes at the senator’s expense.

Although, to be fair, it looks like the senator may have just been scrolling past a photo of his Democratic challenger.

I mean, it's important to know your future Senator, right? https://t.co/kIi6hPgkrP

This is actually kind of sad. We've all been there Ted. It sucks when everyone loves the cool kid more. I feel you. https://t.co/dbS9mdeTKX

Someone shouted at him in a DC restaurant last night that Beto was better looking (not joking). Guess that stuck, more than the “We believe survivors!” chant. https://t.co/0BVgAsia7p

No judgement here – who among us isn't looking at pictures of Beto on our phones? https://t.co/6Nh9wDWJwb

I mean, I have a crush on @BetoORourke, too…

So this is by far the most relatable thing @tedcruz has ever done. https://t.co/wIljjvflRc

Just a night before, Cruz was chased out of a D.C. restaurant by protestors, who at one point declared O’Rourke “hotter.”

Cruz may have just been wondering if they were right.