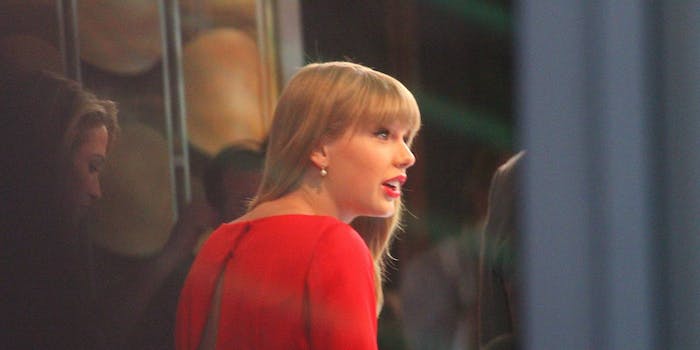 Is Hiddleswift just an elaborate hoax?

It could be a 'Love Story'—or Swift might be trolling us all.

When pictures emerged of Taylor Swift canoodling with actor Tom Hiddleston a mere two weeks after her split from Calvin Harris, the budding romance was met with no shortage of elation and side-eye on Twitter. (Also, some bizarre ham sandwich analogies.)

The pair have since been spotted on many romantic outings. In fact, they seem to be jet-setting and PDA-ing all around the globe, and news broke on Thursday that a proposal may be in the works.

But alongside the seemingly never-ending supply of lovey-dovey paparazzi photos of the duo, a fascinating conspiracy theory has emerged. Could it be that Hiddleswift is really just an elaborate hoax?

Well, this definitely makes sense. Many fans think something is up.

Let’s take a look at the facts.

It seemed like something was decidedly up when Hiddleston sported a “I ❤️  T.S.” T-shirt as well as a heart-shaped tattoo bearing the pop star’s initials to Swift’s Fourth of July bash in Rhode Island.

The behavior did seem over-the-top, to say the least.

And a bit more like a scene from a film, or a music video, than anything you’d actually see in real life.

The icing on the patriotic cake was Ryan Reynold’s apparent misery at spending the holiday weekend with the allegedly genuine couple. Was he weary of their love, or just the façade?

But why the hoax? Why would Swift, who is notoriously smitten with her fans, troll the die-hard Swifties?

Some are saying it’s possible Swift is preparing a Lemonade-style visual album. Swift is due for a new album. Swift has traditionally dropped one every two years, and this fall will mark the two-year anniversary of 1989’s release.

If so, the “romance” would be the perfect centerpiece, sending up the paparazzi’s obsession with Swift and her lovers—by creating a paparazzi obsession.

And that Fourth of July bash? Could be it was a stunt for a teaser-style music video to promote the album? Remember when Swift released “Shake it Off” in late August of 2014? This could be the visual backdrop to another feel-good pop hit to get us amped for the new album.

And, finally, it seems like Swift and Hiddleston are revisiting key moments from prior relationships, from meeting Hiddleston’s family in low-key country gear à la her Connor Kennedy days, to wearing the same blue dress she sported when she was smitten with Harry Styles, to splashing about in the waves like she did with former beau Calvin Harris. The resemblances are uncanny.

So could it be? Is Swift actually trolling us all?

Time will tell. But this is our favorite theory of all.

Yep, that’s the one. Nailed it.