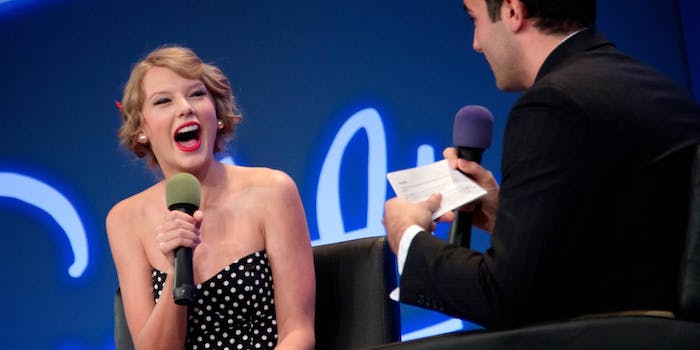 One of the biggest celebrity gossip stories of 2016 just hit the internet.

In the fast-paced world of celebrity gossip, it feels like we have a new Couple Of The Century every six months. But on Wednesday night, this celebrity romance emergency was serious business.

The Sun‘s story includes classic celebrity gossip sources such as an anonymous person “close to Taylor,” saying that Hiddleston had been “courting” Swift since they met—possibly during their awkward yet adorable dance-off at the Met Gala.

Twitter’s reaction was a thrilling combination of jealousy, elation, morbid fascination, and affectionate mockery. The couple (or apparent couple) were unprecedentedly fascinating: the world’s most datable woman, and a British A-lister who usually keeps his private life as private as humanly possible.

These looks like stills from a film about a man who takes his weak nana to see the water one last time. pic.twitter.com/zz0VMpiPLR

Look what finally came in the mail! pic.twitter.com/CowP3P72KS

The drama ramped up with Taylor’s (very recent) ex Calvin Harris unfollowing Swift on Twitter, leading him to trend worldwide as well.

This whole Taylor Swift and Tom Hiddleston thing seems so weird for me. So when can we expect this music video?

It didn’t take long for the conspiracy theories to form. There’s always the possibility that those paparazzi shots actually depict an upcoming music video. But since they’re two of the most photogenic people on the planet, and Taylor Swift’s life usually looks like a Taylor Swift music video anyway, it’s really impossible to tell.

Of course, the real hero in all this is the person who predicted this relationship in a 2014 fanfic, which even begins with the two celebrities meeting at the Met Gala.

The main question now is whether we collectively opt for “Hiddleswift,” as per this fanfic, or if “Swiffleston” will come out on top.