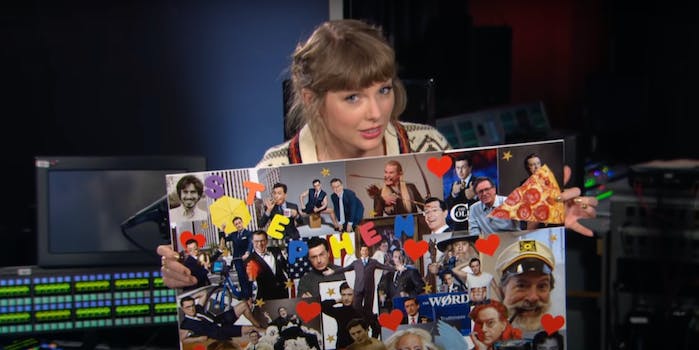 Is Taylor Swift planning to re-release ‘1989’ next?

The numbers seem to be adding up to something.

Last week, Taylor Swift released Fearless (Taylor’s Version), the first rerecorded album that’ll give her control of her older music. After folklore and evermore, it’s the third Swift album we’ve gotten in less than a year, but is it possible that we might end up getting a fourth Swift album in the span of a year? Based on her recent appearance on The Late Show with Stephen Colbert, some fans seem to think so.

Colbert kicked off the interview by trying to get to the bottom of whether he was the inspiration for the song “Hey Stephen.” He wasn’t, Swift assured him, although he remained unconvinced. But Swift also iterated that she was a big fan of his, which included relaying very specific details about him such as his exact age when she recorded the song (“44 years, 179 days old, give or take”) and the exact address of The Colbert Report’s office where she sent a signed copy of Fearless to when it first came out (513 W 54th St.), his height (5’11”), and the beginning of what she claimed was his social security number (33035, but that definitely isn’t his actual social security number). She even made a mood board with his face all over it for inspiration.

“Wow, that is shockingly specific,” Colbert noted at one point.

It’s a very playful bit and includes the “revelation” that “Hey Stephen” is actually about famed author Stephen King. However, Swift has a history of using Easter eggs and hints to give her fans clues about what’s coming next, and some are convinced that Swift has hidden clues about her next re-recorded album.

You can also use math to potentially possibly figure out which album will come next. As @swiftiealyza points out, if you subtracted Colbert’s age that Swift cited in her interview, you’ll get Oct. 27, 1976, which is the same day that 1989 will eventually be released—plus, Swift joked “Shake It Off,” which is part of her 1989 album, has a song that was actually inspired by Colbert.

If you’re looking for something a bit more practical, we do know that Swift has already re-recorded at least one song from 1989: A short trailer for the animated film Spirit Untamed that debuted at the Grammys last month and included audio from “Wildest Dreams (Taylor’s Version).”

It’s a lot to take in, and given Swift’s love for Easter eggs, it’s also not out of the ordinary if it’s eventually confirmed that she did hide something in that interview. But other times, she can take the hints and nods a bit too far. Back in December, after the release of evermore, Swift had to debunk the theory that she recorded a third secret album in quarantine after some fans found a potential name for it on a folklore album cover.