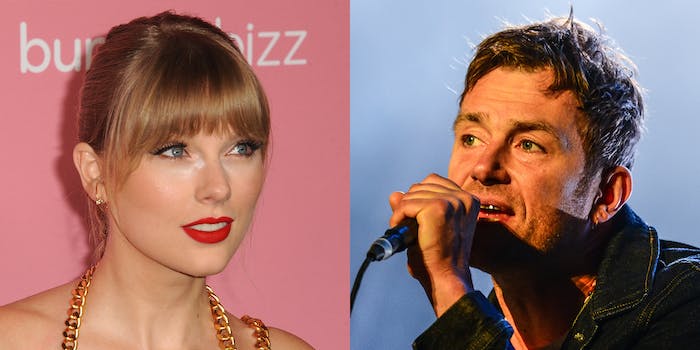 ‘Your hot take is completely false and SO damaging’: Taylor Swift criticizes Blur singer Damon Albarn for his songwriting comments

Albarn has now apologized for saying Swift is a 'co-writer' rather than a songwriter.

Blur and Gorillaz singer Damon Albarn is under fire after making some divisive about Taylor Swift‘s songwriting abilities—and attracting direct backlash from Swift herself.

In a new interview with the L.A. Times, 53-year-old Albarn shared his views on the younger generation of singer/songwriters, agreeing with the statement that modern pop stars rely on “sound and attitude” over writing. When asked about Swift, he replied that she “doesn’t write her own songs,” emphasizing that Swift shares a co-writing credit on much of her work.

“I’m just saying there’s a big difference between a songwriter and a songwriter who co-writes,” he said, highlighting Billie Eilish as one of his favorite younger artists at the moment.

While Albarn’s comments weren’t overly negative or aggressive, they played into some notorious double standards for men and women in the music industry. Taylor Swift’s songwriting credentials are well-established, but she still faces a lot of sexist pushback as a female pop artist who writes about relationships and romance. So it’s no surprise that Albarn’s comments attracted a ton of criticism from her fans and that Swift responded to the interview within hours:

“I was such a big fan of yours until I saw this. I write ALL of my own songs. Your hot take is completely false and SO damaging. You don’t have to like my songs but it’s really fucked up to try and discredit my writing. WOW,” she tweeted in response.

While Swift does work with co-writers on many of her albums, she’s still widely regarded as the primary author of her own music. And on her 2010 album Speak Now, she does actually hold the sole writing credit for every song. In that context, it feels telling to single her out as someone who isn’t a “real” songwriter. Plenty of male pop stars (Drake, Ed Sheeran, The Weeknd) routinely work with co-writers without attracting this kind of commentary.

Albarn quickly responded to this controversy on Twitter, apologizing and describing the original interview quote as clickbait:

“I totally agree with you. i had a conversation about songwriting and sadly it was reduced to clickbait. I apologise unreservedly and unconditionally. The last thing I would want to do is discredit your songwriting. I hope you understand.”

As celebrity disputes go, this one was short-lived. While Albarn’s comments sparked debate about sexism in the music industry—and the idea of artistic collaboration versus auteurship—he wasn’t actually trying to start a fight, and Swift had already won in the court of public opinion.