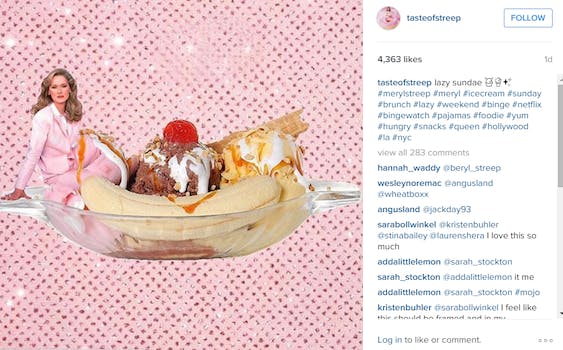 Meryl Streep is the only condiment you could ever need.

Instagram remains a veritable garbage disposal of food shots. I’m as guilty as anyone else of posting way too many photos of meals that are damn uninteresting save for the fact that I didn’t accidentally eat three-fourths of what was on the plate. Every once in a while, however, something truly special comes through the social media mess hall.

The latest sweet treat just so happens to be @TasteofStreep, an Instagram account dedicated to blending actress Meryl Streep with your favorite foods. “The Devil Wears Ricotta” and a stately Meryl as Miranda Priestly meets samoas count as particular favorites for the woman behind the account, Samantha Raye. With “The Devil Wears Ricotta,” Streep is cradling a cannoli with all the poise and grace of a fashion magazine magnate set to a velvety, chocolate background. The image is simply decadent.

Streep has yet to give a statement about her most versatile (Instagram) role yet. So, what does Raye have to say about the actress? She prefaced her response with her appreciation of the art itself. “I’m so deeply passionate about the art of acting, and I have such great respect for those who are truly masters of the craft,” Raye said. “Meryl Streep is a legend, I admire her career, her talent, her sense of humor, and her intense love for her work. While I ‘serve’ food, she serves something far more precious: truth. Her versatility stretches far beyond pancakes and ceviche.”