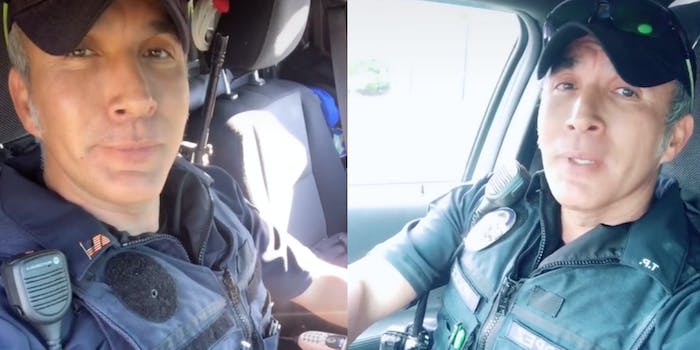 This cop made fun of defunding police movement on TikTok. Now, he’s under investigation

Some videos appear to violate the department's professional standards.

Several Tacoma, Washington police officers are under investigation over content posted to their social media accounts.

Three officers are currently being investigated: Sam Lopez,  Joshua Avalos, and Helen Stieben. The investigation began after several complaints were filed over the content posted to the officers’ TikTok accounts.

The complaints may have been spurred by one of the officer’s TikToks, which went viral this week. The TikTok, posted to Lopez’s account, shows him in uniform sitting in what appears to be a patrol car.

“So I come in this morning, and we’re informed there’s going to be a protest to defund the police,” Lopez says in the clip. “Well that’s fine, I like protests. Except for they requested a police presence. You know, for their safety. At the defund the police event. I shit you not.”

Videos from Avalos and Stieben’s accounts are also being examined. Avalos’ account is private, but Stieben’s content, like Lopez’s, leans on her profession as content inspiration. Many of her videos feature her in uniform, in a patrol car, or discussing her thoughts on Blue Lives Matter and protests.

Several videos from the officers discuss the “thin blue line” flag, which has been adopted as an official symbol of Blue Lives Matter. The pro-police movement is a response to the Black Lives Matter movement and has been widely criticized. According to the News Tribune, Avalos’ videos express support for the divisive movement, while Stieben’s are far more critical.

As the videos have spread online, they’ve gathered both supporters and critics to the officers’ pages. When the videos showed up on Twitter, discussion began around professional standards for police officers.

One user noted that videos posted to Lopez and Avalos’ accounts violate some of the department’s professional standards. Specifically P4.1.9, which states that officers operating outside the scope of the department cannot “address public gatherings, lecture, appear on radio or television, prepare
articles for publication, act as correspondent to a newspaper or periodical, release or divulge investigative information, or any other matters of the Department.”

In response to complaints, Tacoma City Manager Elizabeth Pauli gave an updated statement. She noted that the officers have all been directed to “cease the unauthorized use of city equipment, uniforms or vehicles in any personal communications.”

“I was made aware of the postings that have understandably raised concern with community members,” the statement continues. “We are committed to restoring the public’s trust in the work we do as a city, and particularly in the important role that our police department plays in ensuring the safety of our community. We have entered the incident into our complaint management system for investigation and resolution.”

Pauli added that they will be developing and issuing a policy directed at the personal use of social media.