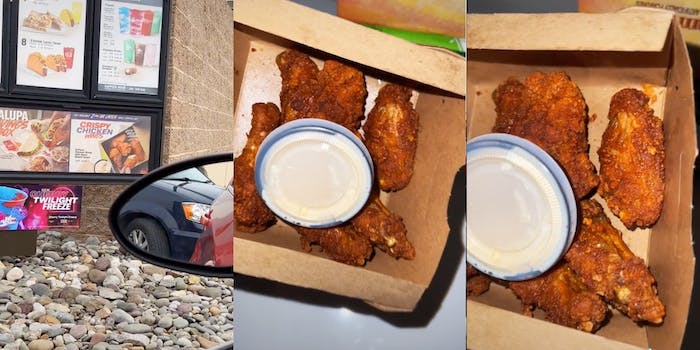 'Why do they look kinda good'

As of Saturday, the hashtag #tacobellwings has received 12.8 million views on TikTok.

According to TikTok user Caleb (@caleb_lennon), who appears to be a Taco Bell employee, the wings are made with Taco Bell’s fries seasoning and served with spicy ranch.

TikTok user Nikayla Poole (@nikaylakay) disagreed though, calling the wings “disgusting.” She shared a video of her wings order, captioning the TikTok, “These wings were disgusting. Y’all know I have to try everything. I shouldn’t have tried these.”

Poole’s viewers left their own reviews by commenting on her video.

“why would u buy wings from TACO bell?” one viewer asked.

One viewer told Poole she was “tripping,” and another said the wings were “bussin.”

TikTok user Jewel (@jewel_shanay) posted her own video of the chicken wings, captioning it, “what da fuck is thisssss.” Although her caption appeared uncertain, she said in the comments that she’s a fan of the new menu item.

“You got one week only available after 2pm runnnn and thank me later byeeeeeeee,” Jewel wrote in a comment on her TikTok.

In response to a viewer asking why the wings actually look good, Jewel wrote, “Because they are lowkey. And they out here capping.”

Taco Bell crispy chicken wings are only available after 2 pm at participating locations while supplies last, according to the Taco Bell website.

TikTok users @caleb_lennon, @nikaylakay and @jewel_shanay did not immediately respond to the Daily Dot’s request for comment via TikTok comments. The Daily Dot also reached out to Taco Bell via email.