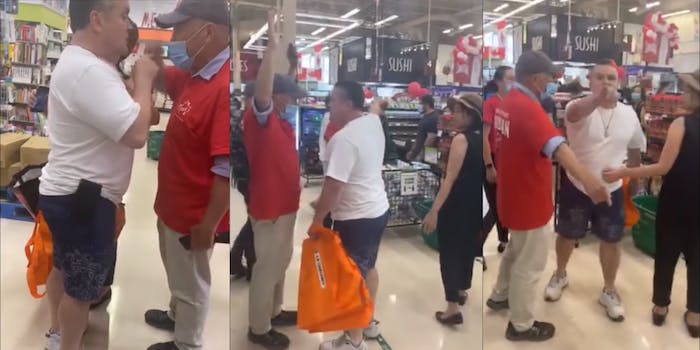 'Take your coronavirus back to Wuhan.'

The coronavirus has apparently become unbearably inconvenient for some people.

Despite the clear evidence that face masks are a useful tool to slow the spread of coronavirus, some people are vehemently against them. For weeks, videos have been emerging of people screaming, cursing, and throwing tantrums over the necessity of face masks in the midst of a global pandemic. When a grocery store in Ontario, Canada asked a man to don his mask while in the store, it spurred the latest of these viral videos.

The video was posted to YouTube on July 7. The nearly four-minute video was filmed at a T&T Supermarket, where a white man went on a racist rant against employees. The Ontario business has required masks since May 4, despite a lack of citywide mandates.

In the video, the man can be seen arguing with the staff. When asked to leave, he empties the contents of his shopping bag onto the ground and threatens to inform the media of the store’s actions. The employee continues to ask the man to leave. That’s when he begins his tirade. His reason for refusing to wear a mask, according to the man’s claims in the video, is due to asthma. He repeats this fact over and over through the course of the video.

Claiming that masks are the culprits behind sickness, the man gets gradually more irate as employees continue to request that he leave. His attempts to demand upper-level staff quickly give way to racist insults, as he begins rattling off disjointed and inaccurate points.

“This is a lie,” the man announces, before really leaning into the racism. “This is a Communist, Socialist lie. Where did we get our Wuhan communist virus? From China. From you guys.”

Soon, as most “Kyles” and “Karens” eventually do, the man turns to interrogating employees about their birthplaces.

“Where are you from?” the man demands of an employee, who repeatedly informs him that he is Canadian. The man completely refuses to acknowledge that any of the employees could be Canadian citizens.

At one point, the man and an employee come uncomfortably close to a physical altercation. The employee continues to block the man’s way and asks him to stop screaming. Soon, he is demanding that the employee—who has not moved—”get out of my face.” Surprisingly, given the man’s disregard of other safety measures, he repeatedly requests that employees give him a radius of the recommended two meters, or around six feet.

By halfway through the video, the man becomes so surrounded by employees that he has no choice but to move toward the door. A half dozen uniformed employees gather to slowly urge him and his wife toward the exit, as the man continues to scream about his asthma and the store’s violation of his rights.

When the same employee that he has clashed with multiple times continues to stand protectively between the man and the other employees, things almost come to blows. The man repeatedly threatens the employee, even pulling his arm back as if for a blow at one point.

“Go back to China where you came from, and take your coronavirus back to Wuhan,” the man screams at the employee.

Near the end of the video, a woman who appears to be in charge repeatedly demands that the man and his wife “please leave my store.” The man, through claims of asthma and the mask policy “making people sick,” finally moves toward the exit. Not before hurling as many racist comments as he could, of course.

As of this morning, the video has been viewed more than 275,000 times. In the comment section, viewers questioned his claims about asthma.

“If someone has severe asthma to the point that they cannot use a facial mask, how is this man able to scream from the top of his lungs without being out of breath,” one commenter asked.

Other viewers couldn’t help but notice the apparent race of the man’s wife, who can be seen in the video. Based on the brief glimpses viewers got of her, many assumed the woman to be of Asian heritage. Suddenly the man’s racially-charged comments seemed all the more toxic.

“Dude, you are shopping at a T&T,” one commenter wrote. “You have an Asian wife. You can’t write this kind of irony.”

Many people also found the fact that the man was hurling racist comments at an Asian supermarket particularly baffling. They noted that T&T, which primarily sells Asian foods, was founded and is run by Taiwanese-Canadians.

The user who posted the video, Firenze Yeung, noted their anguish at the way employees were treated in the video.

“My heart was broken and tears shed,” they wrote. “Where is our multiculturalism? Where are our national values? Even PM Trudeau called grocery store employees ‘heroes!’ Why are heroes treated like this…?”