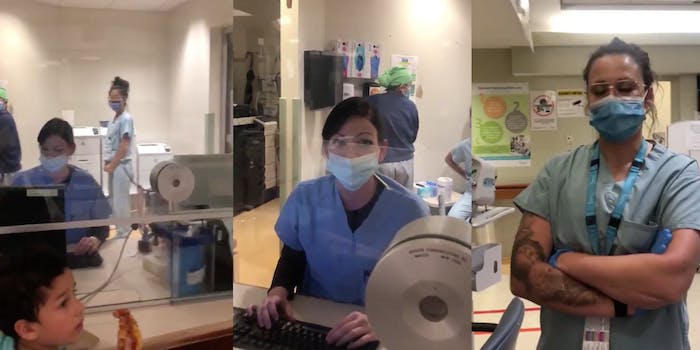 Video shows woman refusing to wear a mask in a hospital

A woman has gone viral after she posted a video of herself refusing to wear a mask at a hospital in Toronto, Canada.

Letitia Montana posted the video to her Twitter on July 4. She said she was at the St. Joseph’s Health Centre to get help with a suspected broken finger.

“I was asked to wear a mask, which I refused to do,” Montana said. “As a result, hospital staff asked me to leave and immediately called 3 security guards to escort me out.”

In the video, the nurses attempt to explain the importance of using a face mask, especially in a hospital. Montana asks what policy doesn’t allow her to film in a hospital but does require her to wear a mask. One of the nurses shot back, “Ministry of Health.”

The Toronto Sun reported that the hospital’s policy requires all patients, staff members, and visitors to wear face masks. Since the incident, it has since become mandatory for everyone in the city to wear masks.

Despite the rules and the swift social media backlash, Montana doubled down on her actions in the video saying it was “sad how well the mainstream media propaganda is working.” She then went on to tweet conspiracy theories about masks “endangering” her and her son.

Montana has since been seen at anti-mask demonstrations in Toronto, where protesters walked around without masks and did not social distance. There have been almost 15,000 confirmed cases of the coronavirus in the city.