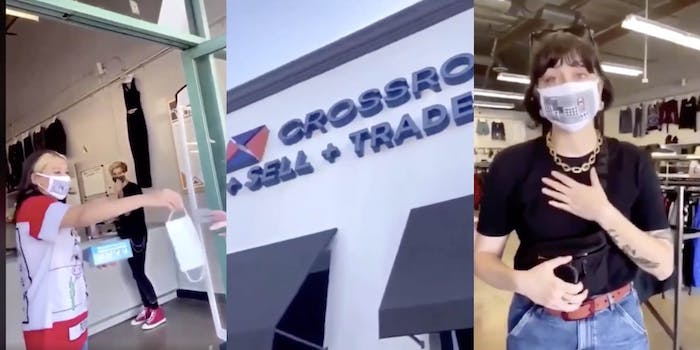 She filmed her own meltdown after being refused entry.

A woman called store employees “psychos” and “sheep” for requiring customers to wear a mask in their store.

“No one can walk in without wearing a mask—when there’s really no fucking virus even affecting anyone—because they’re all fucking liberals,” the woman says as she records.

In the video, a Crossroads Trading Company employee handing out disposable facemasks attempts to give one to the woman, who declines, saying she can’t wear one because of a health condition.

When the consignment store employee attempts to explain that customers must wear a mask to shop at the clothing store, the woman cuts her off.

The video, posted in the “Public Freakout” subreddit with the caption “Karen can’t wear a mask because of a ‘medical condition’ and is refused shopping :(,” has 62,000 upvotes and more than 6,000 comments.

“You can’t deny service for that reason,” the woman says. “I have you on video for the law,” she continues when the employee walks away to get a manager.

The manager backs up her employee and explains that wearing a mask is store policy.

“We’re allowed to require that for the safety of our employees,” she says.

The woman argues that, in addition to her medical condition, she should be allowed to shop without a mask since everyone else in the store is masked up and she plans to stay several feet away from them.

Both the manager and employee argue that they’re protected by ADA regulations, but it’s unclear who’s in the right.

The woman never specifies what state she’s in, but so far, many have issued executive orders requiring the use of a mask for the public and in businesses. But, most states have exceptions for people under a certain age (a baby may not be able to reasonably wear a mask) and if a person’s medical condition affects their mask use, according to JD Supra.

The legal news site writes that if a customer says they can’t wear a mask because of a disability, the business should try to find alternative methods of service so the customer can still get the goods or services they need while keeping the business’ employees and customers safe.

In the video, the manager, who later identifies herself as the hub manager for the store’s Southern California district, indicates that the woman is still welcome to shop if she wears one of the masks they’re giving out.

“The whole fucking point is to not wear a mask,” the woman says as she leaves the store.

Crossroads has not released a public statement about the incident.