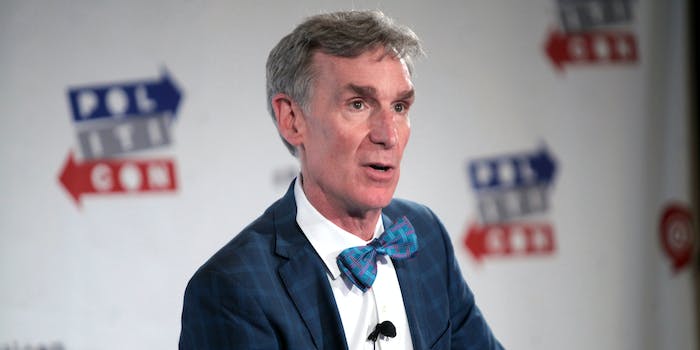 Despite the impassioned, research-backed pleas of credentialed health officials and scientists, many Americans still believe wearing a face mask does not help curb the spread of coronavirus, or worse, will actually make them sick. But perhaps skeptical Americans might be more willing to listen if they were getting their message from somebody with a little more charisma.

If that’s the case, they’re in luck. On Wednesday night, Nye uploaded two videos to TikTok that outlined the importance of face masks, using the “Consider the Following” format he popularized on Bill Nye the Science Guy. Face masks, Nye explains, prevent participles from our respiratory systems from getting into the air and entering other people’s respiratory systems.

Nye first demonstrates this principle by attempting to blow out a candle while wearing different types of face coverings. He starts with a scarf, which offers minimal coverage and allows him to blow out the candle easily. However, when he wears a homemade face mask that includes two layers of cloth and a pipe cleaner to keep it flush against his nose, he’s unable to extinguish the flame.

In a second video, Nye demonstrates the effectiveness of a medical-grade N95 mask, which filters at least 95% of airborne particles. When he tries to blow out the candle through the N95, the flame doesn’t even flicker.